On my most recent trip (today) to California’s Great America, I noticed some unusual and unfortunate things.   There were two things that were noteworthy, one is the old Club Blood from Halloween Haunt and engineers at FireFall. 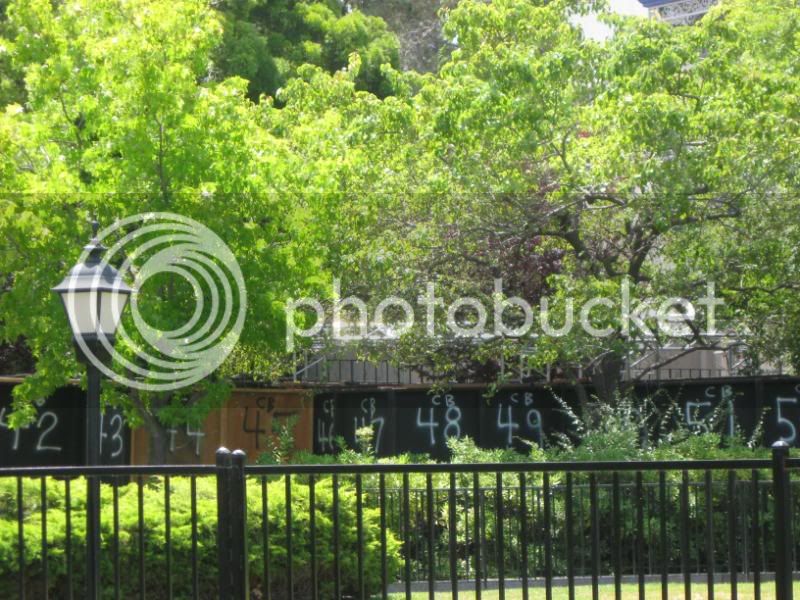 While waiting in line for the Star Tower, I noticed some construction walls across the field and after analyzing it, I realized it was Club Blood from last year’s Halloween Haunt.  Not only were the walls still up, but it appeared that most of the decor was still in place for the maze too.  Really surprising.

Club Blood as seen from the Star Tower

The maze appeared to handle the winter rains nicely which leads me to believe that it was covered.

A close up of the entrance.

After getting off,  further inspection seemed manditory to me.   I noticed an exposed path with gardeners working it and right next door was the Club Blood walls.  Now remember, nothing was blocked off to guest.  You could see all the little hatches that are used for employees during the actual Haunt.  Then, there was a side path that lead to the entrance of the maze.  Again, not blocked off, at all.  The only thing that seemed to be block off was the path that is usually used for directing Club Blood traffic.  I was surprised to see that not only were all the walls still there, but that there was no real baracade that stopped guest from going through the maze.

I did not actually go through the maze because it was obvious that it wasn’t in walk through condition, but I still find it very interesting that all of this was still there.

Two mechanics were there for a good portion of the day working on the ride.

Later, we were walking around the park and noticed that Fire Fall was still closed.  As far as I can recall, FireFall has been closed from the start of the season.  Today it appeared that two mechanics, one looked like a CGA mechanic, the other appeared to be foreign from the park.   There also was some sort of catwalk in the water as well as what appeared to be a new part.  This part was extremely shiny and glossy so inless it was just taken off and redone, I think that it was imported recently from Huss.  Could this part solve the problem that has caused the long closure?

A catwalk type object seemed to be in the water.

Finally some pictures of the rest of the park:

Down Under Thunder Taking the plunge at Boomerang Bay.

Why is this support so odd?

Until next time… Hasta luego.

That concludes, today’s update.  Next California’s Great America trip will be all about the park entertainment.  Be sure to comment and leave your park thoughts!