Six Flags Magic Mountain opened a new breed of monster in January 2001, a monster that soon became a problem to contain, as a result for the 2008 season the park refurbished this monster and made it known as X2.

X2 is an S&S/Arrow Dynamics 4th Dimension roller coaster, meaning that the cars are on their own individual axis’ and can rotate 360 degrees vertically.   Not only is this factor extremely disorienting, but it also provides for a unique, one of a kind expierence in the United States.

After cresting to top of the lift hill the riders are teased with a predrop, prior to dropping straight down.  The cars are flipped for you to face the ground before going head first and laying down.  The train climbs up a massive element called the Inside Raven turn at over 70 mph.  Wind pushes riders’ faces and they are now hanging in a flying position before heading downward again.  Finally you go through a few more hills and turns all while flipping creating a truly dizzying journey.

During the transformation, Six Flags installed many new additons to make the ride even better.

One of the additons was new sound system; the new audio was a sleeper hit because it created suspense before your adventure.  For example, as soon as you leave the station, the speakers come on singing “It had to be you…” and you laugh and chuckle with a hint of fear at the back of your throat.  Climbing up the lift hill voices are screaming over the speakers saying things like “Why are we doing this!?”   I deem this new addition as 5 flags.

Another thing the park did during the transformation was change the colors from magenta and yellow to a much more intimedating red and black.  While it doesn’t sound like a great addition it sure did add a whole new element of terror when looking at the ride.  I give this addition 4 flags.

Finally the grand daddy of all the effects added is the fire.  Right before going into the Outside Raven turn, riders lie on their back as huge fire balls are shot just a few feet away from their heads.  Because of the rotating of the cars, it is nearly impossible to predict where the fire will come and when you are on the ride the fire appears much closer then when off ride.  It is crazy feeling the heat of the flames against your face and the power of coaster all at one time.   This new effect deserves a whopping 6 flags, more flags more fun!

So when you are in the Valencia area I dare you to come and try your luck on the beast, X2. 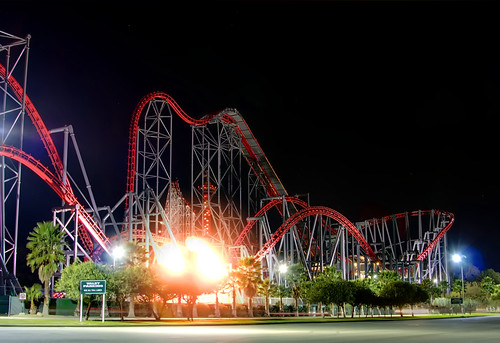