The Legend of Mythica 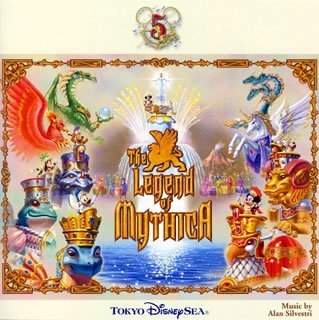 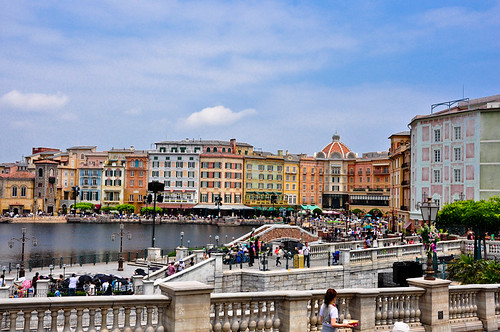 Mediterranean Harbor serves as the backdrop for the Legend of Mythica. I can only imagine that the subtle colors of the building make the floats pop. Courtesy of meanderingmouse

Tokyo DisneySea is perhaps the most stunning theme park in the world.  Not only does it feature world class attractions, but it offers and excellent variety of entertainment.   DisneySea’s main daytime show is the Legend of Mythica, an epic tale of the connection between man and mythical creature.

The story goes, that in ancient times, man and mythical creatures shared the same place, one world and that there was harmony among all.  The creatures would come to the rhythm of the drums, the drums created a harmony, a peace setting, and a bond between the two worlds.  But one day, man couldn’t decide what rhythm  to play so the drumming stopped.  As a result, the creatures headed out to the ocean only to return when the drums again played a rhythm united as one. 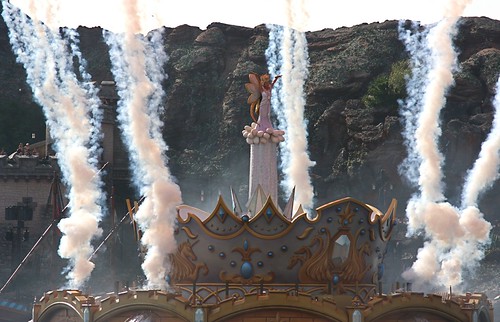 The Diamond Goddess tells the story of man and creature as fireworks are set off to create a sense of conflict and suspense. Courtesy of meanderingmouse

As the key, a circular barge, arrives in Mediterranean Harbor, the diamond goddess rises from it.  She begins to tell the tale of man and creature, before the music reaches a high point and jet skis shoot out from inside the key.  The Diamond goddess states that only one family can restore the harmony between man and creature; Mickey, Minnie, Goofy, Pluto, Donald, Chip and Dale.  Five barges arrive, representing six different classic Disney characters with their own spirits.  Goofy represents the Spirit of Laughter, Minnie repersents the everlasting Spirit of Love, Donald represents the brave Spirit of Adventure, Pluto represents the Spirits of Loyalty and Sincerity, and lastly, Chip and Dale repersent the Spirit of Friendship.  Each arrive on their own creature, that is carrying a huge egg on the back, their own color scheme, and a bundance of dancers.  Rising out of the crowns of the creatures are the characters themselves.  Once all characters are introduced, Mickey rises from the key raised by a stone lion and he represents the enduring Spirit of Imagination!

Goofy, the Spirit of Laughter, rides on top of a mighty ram with his followers below. Also perched on the ram is a huge purple, decorated egg. Courtesy of TheJon 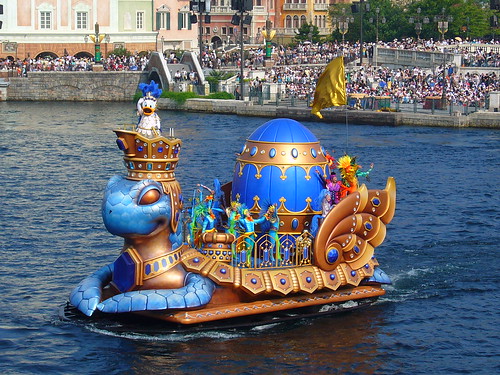 Donald, the Spirit of Adventure is perched high above the Winged Turtle with his own crew of dancers right behind him. I love all the intricate detail and contrasting colors that make the floats so amazing. Picture courtesy of Flowin' 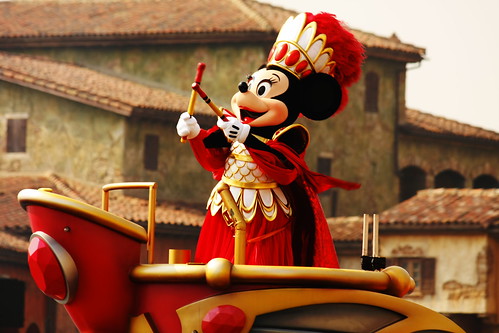 Minnie, the Spirit of Love, is on top of her Griffon in a strong red outfit with the drum sticks. Courtesy of dreamagicjp 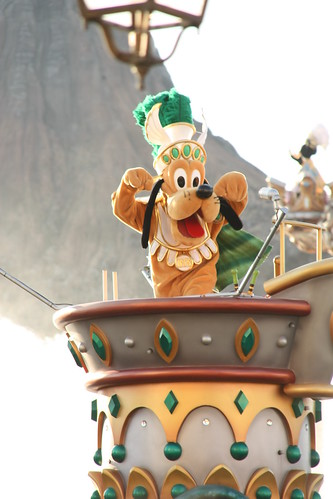 Pluto, the Spirit of Loyalty and Sincerity, is perched above a dark green frog. Courtesy of nagi 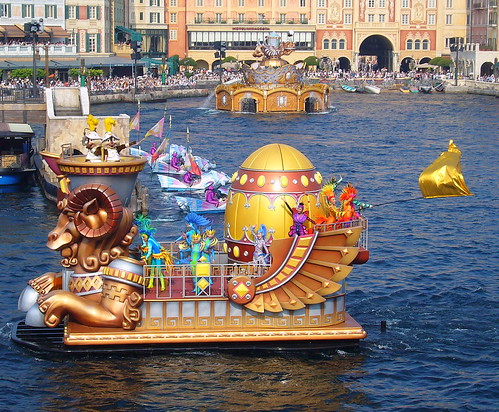 Chip and Dale, the Spirit of Adventure, sport a yellow color scheme on top of their majestic ram. The flags in the back symbolize harmony. Courtesy of flowin

Mickey, the Spirit of Imagination, raised above the key speaks out to the audience about the new members they made on their voyage to Mythica. Courtesy of nagi.

All of the boats circle around the key and harbor before docking on the shores of Port Paradiso.  The dancers leave the boat and go begin to take the ceremony to the land.  Once the opening act comes to a close, the beat of the drum begins.  All of the dancers grab their drum sticks and dance around the massive drums.  Each of the characters too also have their own pair of Drum sticks with Mickey talking in the middle.  Each of the 6 characters on the creatures begin to descend into the heads of the boats.  Finally the boat docks and as the music picks up, the characters join the dancers on land to join the celebration!  All of the characters in their Roman costumes cheer to the crowds and dance with their own staffs before a great firework conclusion of the song. 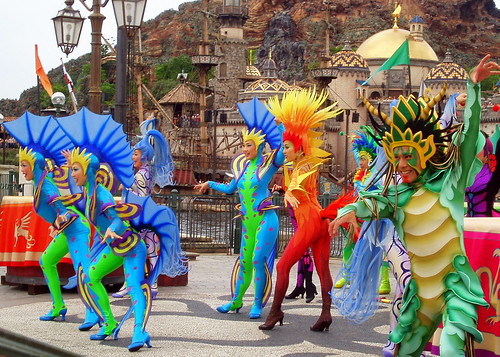 In select areas on shore, colorful dancers create a bright and high energy atmosphere as they swirl around with drums and staffs. Courtesy batang_igat 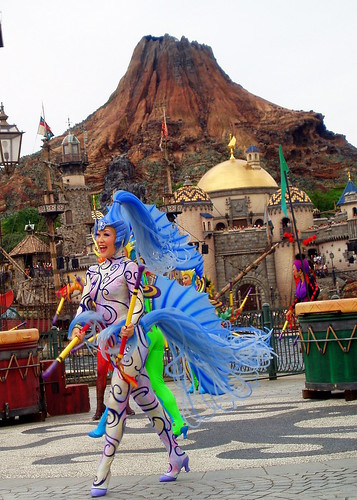 The dancers on shore use their bright colored costumes to attract attention against the dark background. Here we have a truly stunning photo of one of the beautifully dressed cast members performing against the parks icon volcano, Mt. Promethus. Courtesy batang_igat 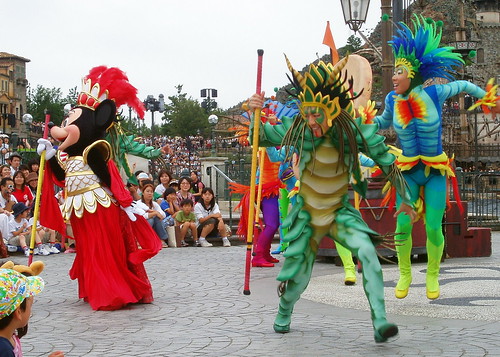 After the dancers create excitement, the characters take to the shore and dance along with Mickey in the background keeping the rhythm. Courtesy batang_igat 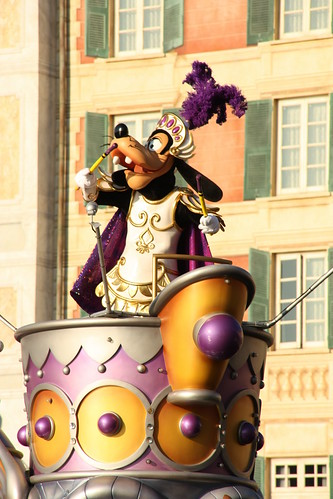 Goofy gets into the rhythm by using his drum sticks to create an infectious beat! Courtesy of nagi. 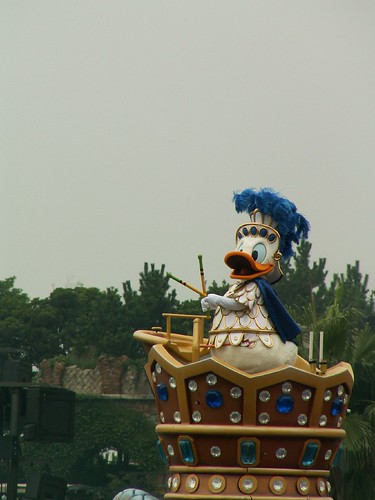 Donald's head dress blows in the wind as he beats his drum sticks. Courtesy of nagi.

Finally a softer tone music comes the characters return to their boats.  Dancers begin a ceremony of puppets, kites, flags, and movement to a beautiful score representing the return of the creatures to mankind.   On the 5 circling barges, the eggs open to reveal their own goddess that rise into the air, along with the Diamond goddess showing the final harmony that now exist between man and creature.  As this is happening, new barges emerge from under the bridge and circle the key with the other 5 boats.  The new barges are massive and all have different effects, such as a fire breathing dragon, a hydra with stunts in the back, and many more.  Once the main score starts up, and the ending section begins, dancers exit through different areas of Mediterranean Harbor and the floats circle the key one last time before exiting under the aqueduct to backstage. 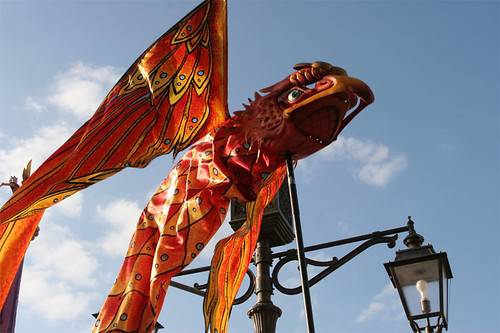 Dancers on shore bring the new chapter to life with elaborate puppets, beautiful movement, and an ocean scene. Courtesy of [email protected]

Each of the character barges, eggs open to reveal their own goddess that rises into the sky. Here we have Goofy and the goddess of laughter beautifully rising to the heavens. Courtesy of Mori Chan

The ram's egg reveals a golden goddess that represents the Spirit of Loyalty and Sincerity. Courtesy of Mori Chan

The crown on top of the tower Mickey rises on opens up to once again reveal the Diamond Goddess to tells the final chapter of the battle between man and creature. Courtesy of nagi

Now that the rhytm has reunited as one, the creatures can return from the sea. Escorting them is the dolphin warriors. Courtesy of KristenRice 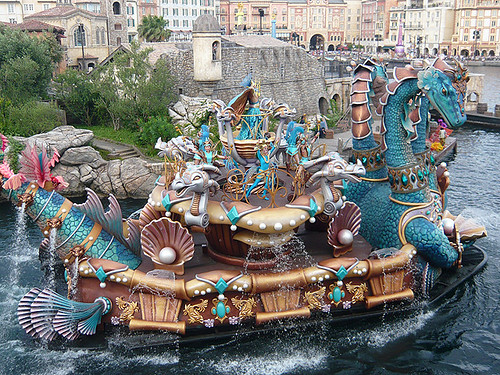 The creatures return from the sea accompanied by different mythological animals on their backs also. Courtesy of Flowin

A Flying unicorn arrives into the harbor carrying beautiful acrobats on her back. Courtesy of mickeyminniedaiski

A massive dragon arrives carrying a sphere of some sort and breathes fire as he passes by the crowd. Courtesy of mickeyminniedaiski 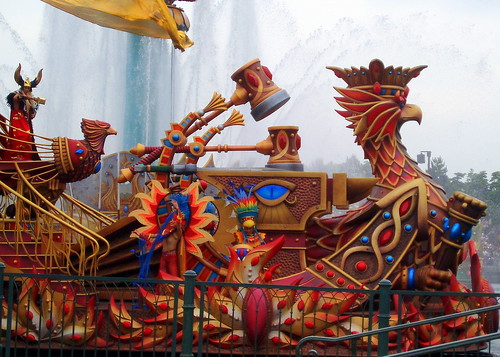 A Thunderbird descends upon the harbor with might hammers on his back. Courtesy of batang_igat 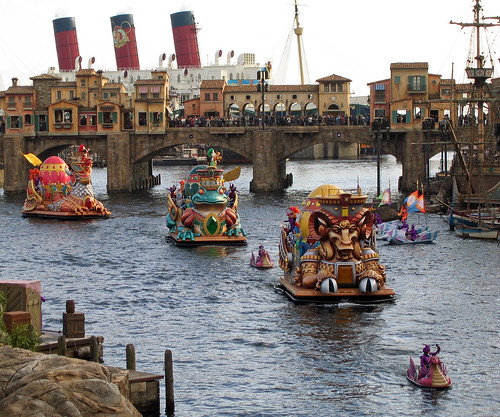 After the festivities end, all the barges and the key return to back stage. What a wonderful show! Courtesy of Ruth and Dave

Although I have not seen this spectacle in person, and most likely won’t see it in my lifetime, I have watched numerous videos to even get a scope of how aw inspiring the show is.  Every detail, every aspect is so well thought out and so well done that it is what I consider to be the best day time performance of any kind in a Disney parade.

Like what you saw?  Saw what you liked?  Leave your park thoughts and comments!