With Six Flags trying to raise attendance as well as save some cash, I have a feeling we will be seeing some more of these “transformations” in the coming years.  I think there are some obvious canidates too.  Lets take a look. 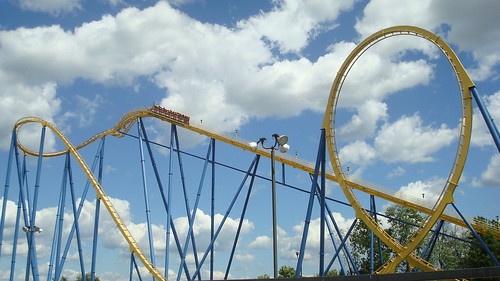 Clearly, the park that needs it most would be Six Flags Kentucky Kingdom.  From what I have seen and heard, this park is in desperate need of a major expansion.  Chang, the parks main coaster would be an excellent canidate to give a transformation too.  Theming, an on board sound track, new paint job, tunnels, fog, and of course fire would probably bring in some crowds to the park allowing funding for a small expansion perhaps like Six Flag’s America’s upcoming Thomas Town?

Another ride that  see recieving a transformation is Medusa at Six Flag’s Discovery Kingdom.  Medusa is a nice coaster, but it does need some touch ups.  After all, in my opinion Roar is far superior to it then the mild Medusa.  Again, fire on the last helix would be great with a more elaborate egyptian theming.  What another awesome expierence that would be.

What do you think Six Flags will “transform” or if there will even be any more transformations?