Posted on August 2, 2009 in Uncategorized by Justice
2 Comments

Currently their are two S&S El Loco coasters in the world, Steel Hawg at Indiana Beach and Mumbo Jumbo which just opened at Flamingo Land.  Each ride are currently a hit with guest and provide sensations that can’t be found anywhere else in the park.  What do I think of these, coasters?  While I haven’t ridden one, I think they are great and have a very nice future. 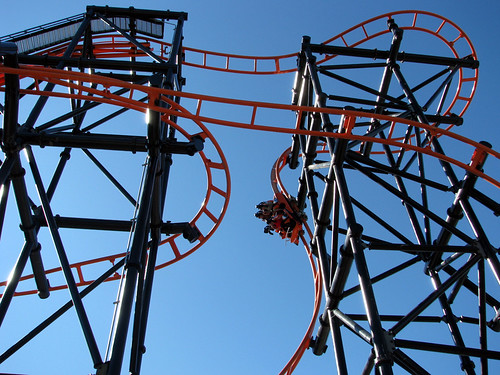 Considering the fact that Wild Mouse coasters became a world wide hit because of their inexpensive cost, compact size and overall appeal, I predict that El Loco’s will also be a common coaster model in the coming years.  Not only is it perhaps smaller then a Wild Mouse coaster in terms of space it takes up, it also provides for an excellent, unique thrill that currently, no other company can truly offer.  It is also worth noting that for being so thrilling, the height limit is also very low at just 48″ meaning that it serves as a thrill coaster as well as a family adventure.

El Loco’s combine tight turns, twisted maneuvers and beyond vertical drops.  Just looking at the drop creates excitement as it is several degrees beyond vertical.  Not to mention that the ride has inversions as well as several turns just as tight, or tighter then those turns found on a Wild Mouse. 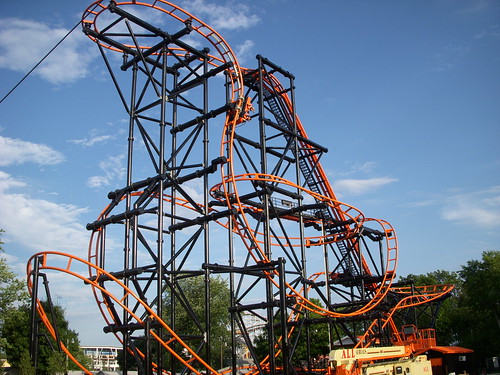 Do I think we will see this exact El Loco model having an eruption in popularity any time soon?  Nope, of course not.  All major models go through some tweaking like the Vekoma SLC which has become on the most popular coaster models in the world and early versions of it were not identical to the current common version.  I am almost sure a modification will be made that will allow the coaster to be capable of handling more cars at one time.

None the less, I am really excited to see this coaster come to more parks in the world as I think it will be a hit.  What are your comments and park thoughts?