Just yesterday I had the pleasure of visiting Gilroy Gardens in Gilroy, California.  The park is easily the most beautiful park on the West Coast and features a great variety of family attractions.  While the park isn’t exactly what I call thrilling, for anyone who has toddlers as relatives, this is a great place to visit.  Lots of stuff for the little ones to do and it is so bright and colorful!  Lets take a tour.

The front plaza features simple structures as well as beautiful plants.  Each plant was hand placed by the park’s original owner and creator Micheal Bonfante.  It is very clear that all of these plants were done meticulously by the mind of a genius.

Once in the park you walk across a bridge that is above a creek and the picnic area, it really provides a stunning first look at the park.  I had the treat to see a swan in the creek too which makes the park feel more like a part of nature then it does a theme park.  Again, notice the elaborate landscaping that was hand done.  Below is also Claudia’s Garden, which is named after Micheal Bonfante’s wife.  It is perhaps one of the best gardens due to its calming waterfall. 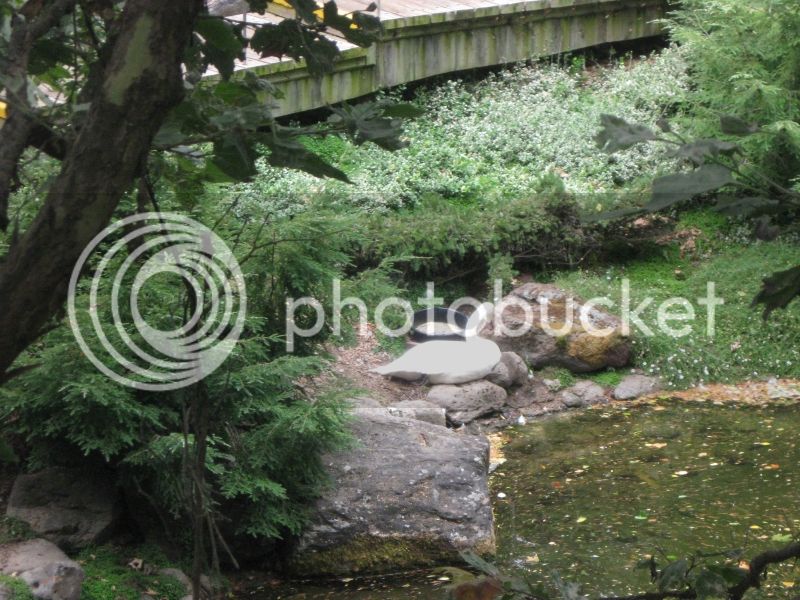 Once in the park, I headed straight to the train station as I was told this was a great way to start any visit, it really was.  On your journey you get to see thousands of trees, a glimpse of the South Country Backroad cars, as well as the Monarch Garden.  When Micheal Bonfante built the park he had big plans, one of which was to expand the train to a full sized steam train, however the park went into survival mode and the new train never came into frutition.

Once off the train at the Coyote Junction, we decided to check out the famed Bonfante Falls.  The watefalls include more then 500 rocks that were put in place by Micheal Bonfante himself and features over 5 different types of falls.  On the tallest water fall, guest can walk behind it and check out the back side of water!  Beware though as you may get a little wet.

After a bit of confusion of the location of the coaster, we finally found it and decided to check it out.  Quick Silver Express is one of the park’s two coasters and is a Morgan  Mine Train.  Quick Silver Express winds through several turns, climbs 2 lifts, and manuevers the terrain in a fun journey.  Of course it isn’t extreme, think of the thrill level as a mild mine train.  My brother and I rode the back and the front but oddly we both agreed that the front was much better.  In the queue, there are several different walls that feature information about Quicksilver as well as a bunch of animatronic racoons playing with dynamite!

Next up was the Monarch Garden.  This garden is enclosed and I believe is suppose to feature butterflies.  However we didn’t see a single butterfly in this building, one of the problems was that the door was opened and closed for the Monorail to come through was stuck open and there was no door for the train to enter or exit, therefore there was several ways for the butterflies to make it out of the building.  But even without the butterflies, this was a stunning area.  There were several waterfalls, dozens of unique plants, and peaceful creeks.  What a wonderful expierence!

After we gawked at how amazing the monarch garden was, we headed outside and rode the Panorama Wheel.  It was awesome because we were the only ones on our first time around and then people on the opposite end of the wheel boarded.  After that we went around 9 or 10 times before he let us off.  Very fun.  Once on the wheel you can really appreciate how much effort was put into the park.  Not to mention gaze into the beautiful background hills.

Once our ride on the Panorama Wheel ended, I headed out for some lunch. On our way we noticed a animartonic show that featured talking fruits and vegetables! It was incredible! I only got to see the very end but it was so clever and so entertaining, it captivated the entire audience without a doubt.

Thats it for now, be sure to check back in a few hours to see Part 2!   Leave your comments and park thoughts!