No more Hands Up at Thorpe Park 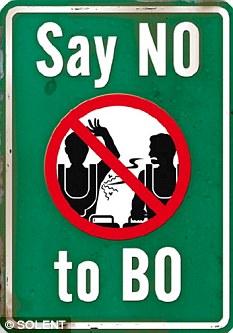 Yeah you read right, some how European body odor is so bad that Thorpe Park has banned putting your hands up.

In a bid to crack down on sweaty summer smells a theme park is banning visitors from riding its rollercoasters with their hands in the air following complaints about body odour.

As of tomorrow, which is expected to be the hottest day of the month, Thorpe Park will put up signs telling visitors to keep their arms down on the rides and ‘Say no to BO’.

With temperatures expected to reach 29C, (84F) bosses at the park in Chertsey, Surrey, expect an excess of perspiration as punters queue to go on rides guaranteed to make you sweat.

As well as signs, wardens on the rides will also remind people to consider their fellow passengers.

Anyone ignoring the warnings will be escorted off. Those who continue to do so will be asked to leave the park.

Mike Vallis, a director at Thorpe Park, said: ‘We’ve found that when the temperature tops 25C the level of unpleasant smells can become unacceptable and we do receive complaints.

‘Our rides are really scary and people tend to sweat more than normal due to the fear and anticipation they experience while queueing up so it can get really pongy.

‘Therefore, we felt a ban in temperatures of 25C plus would be the best way to ensure our guests have the most enjoyable experience and aren’t exposed to any unsavoury armpits.’

What a joke.  I mean really, it is funny, yet depressing for those who actually go to the park.  Is 84 Degrees F. really that hot?  No, trust me I lived in Arizona for 8 years.

Is body odor that much worse with hands up?  Nope, the smelly people would smell either way.  I suggest that next when the tempature reaches 27C, they had soap and bubbles to Tidal Wave so everyone who goes on gets a good clean shower.  That solution makes more logic then the current one.  Couldn’t you imagine it….Thorpe Park security comes up and says “You smell awful.”  Drag that person to the bridge on Tidal Wave he gets a good shower, problem solved.

Please leave your comments and park thoughts on how ridiculous this rule is.