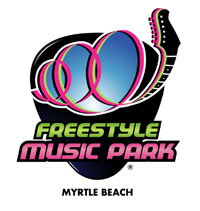 During my trip to Myrtle Beach, I was able to spend a day at the newly transformed Freestyle Music Park. Here are some of my thoughts on how the park is doing under the new management:

1. Ride Operations: The ride operations were pretty good. Round About, formally Maximum RPM, was open all day and was cycling a train even 30 seconds-1 minute. Unfortunately, The Time Machine was only operating 1 train, which lead to a cycle about every 5 minutes.

2. Staff: I couldn’t be more happy with the improvement of the staff from last year. Last year they were just “there,” they did their job, but not much more. This year was much different however. Several “Crew” members asked me how’s my day at the park has been. Overall they just all seemed more enthusiastic about their job.

3. Attendance: The park was pretty crowded, we left about 1:30 to go check in to our hotel, and from what I could see, the parking lot appeared to be half way full.  We asked one of the cashiers at while we were getting lunch if the park is doing better this year. She said “Much better, last year was really slow, but we’ve been very busy this year.”

4. Marketing: While we didn’t see near as many billboards coming in to the Grand Strand as we did last year, every business, from our hotel to even fast food restaurants had a Freestyle Music Park ad somewhere inside.

5. Food: Last year the food was good, but this year was a huge improvement, but what’s better than that is the pricing. The meal prices even rival fast food restaurants.

6: Shopping: While there isn’t a lack of band merchandise, the park needs to work on their souvenirs. But, with all of the changes that needed to be made in the 2-3 month period after they bought the park, its understandable that they just kind of threw the souvenirs together to at least have something on the shelves.

6. 2010? It looks like Freestyle Music Park may be getting a new addition in the “Myrtle’s Beach” section of the park. Many rumors point to a water ride of some type which would clearly fit in that area of the park. You can cleary see servey markers in the area beside the Bali Hai Restaurant: I’ll be reviewing the shows in a later post.

Thanks for reading! Leave your comments and park thoughts!