Posted on August 25, 2009 in Uncategorized by Justice
0 Comments

This new nighttime parade, features different characters in a dazzling spectacle.  By combining magical story telling, terrific music, and live performers, this new parade has been a hit ever since it premiered in March.  Lets take a look: 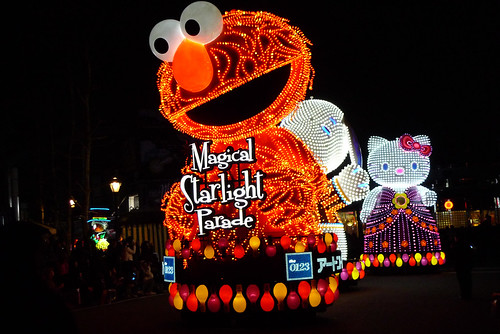 Leading the parade, are three familiar park characters, Elmo, from Sesame Street, Snoopy, from Charline brown, and Hello Kitty.  Notice the simplicity that creates a great entrance and sets an excellent tone for the parade. 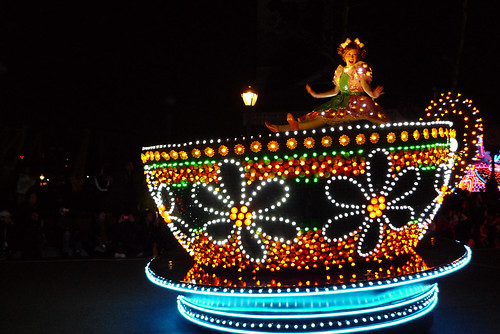 Following the three lead floats, introduces the Alice in Wonderland unit.  Based off the classic fairy tale, this unit takes you through the wacky world of Wonderland with bright colors, performers, and huge floats.  Pictured above is the parks Alice in a giant teacup that interacts with guests! 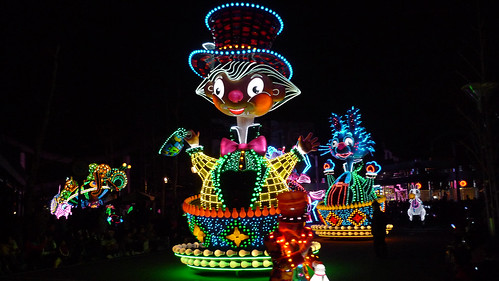 Behind Alice is an array of characters such as the Mad Hatter, Chesire Cat, and several more.   If you can’t notice, the park used different techniques for the lights.  On most of the float they used small individual lights, but there are also huge light up objects that are used for details like the face and the trim on the teacups.  For his hair, the park used huge flexible light sticks. 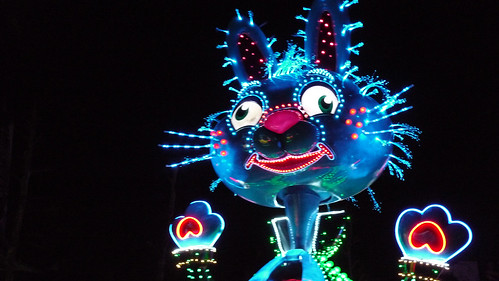 High above the crowd is the lovable Chesire Cat.  I really like how is face is reflective so he doesn’t require any internal glow and instead relies on the surrounding bright lights to give him a unique and clever shine. 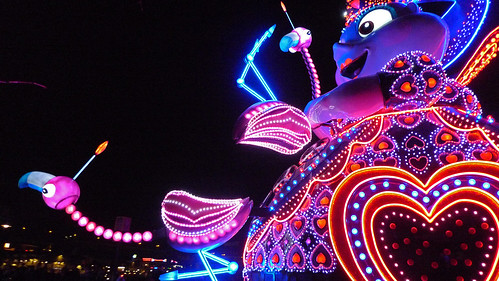 A massive Queen of Heart is featured in this chapter of the parade.  The designers had some really good imagination to picture a queen this ugly yet charming at the same time. 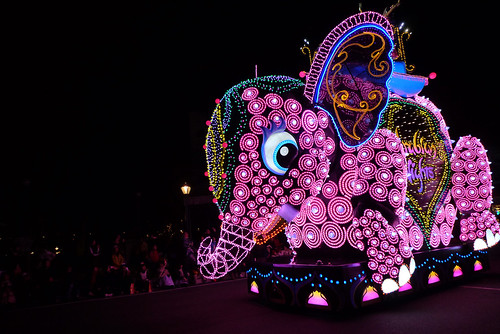 Following the Alice in Wonderland unit is the Arabian Nights.  Introducing this new chapter is a giant pink elephant who moves his head and legs  he shines his light throughout the park. 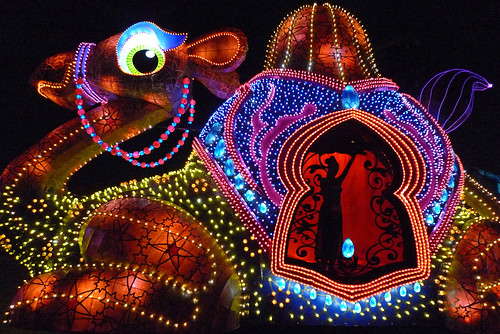 A camal with a beautiful belly dancer inside wanders the streets as his intricate skin passes by the audience creating a brilliant spectacle of lights.  Notice how he is lit from the inside with only his features having individual lights.  Mind you also that the girl is an actual performer just lit by two lights to create a projection style effect. 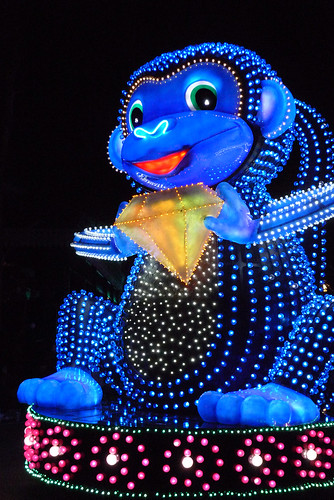 Passing by next is a large Monkey with some sort of gem in his hand.  Another addition that makes this parade so special. 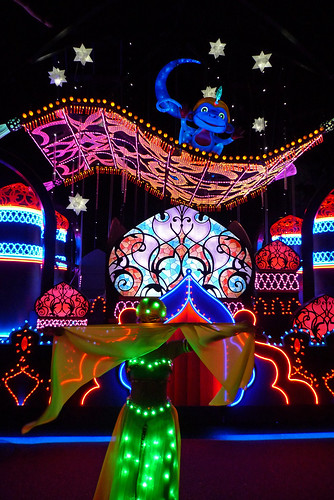 You cannot tell through still pictures, but in reality the carpet above the belly dancer has a ripple effect that creates a stunning visual effect, I still do not know how the park pulls it off. 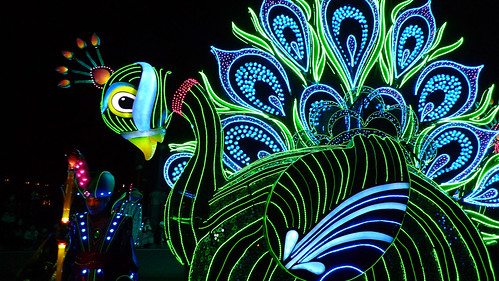 Concluding the Arabian Nights unit is a peacock section with dazzling peacocks in there brightly colored fittings.  I love all the little details you can find in the parade. 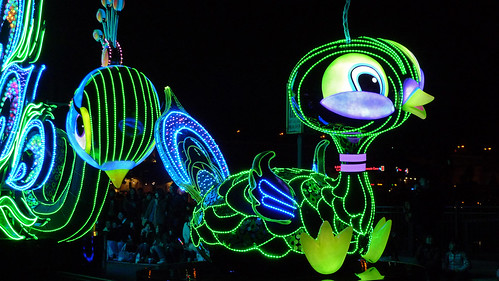 Following Momma Peacock is a cute little baby Peacock showing off his feathers just like his mother. 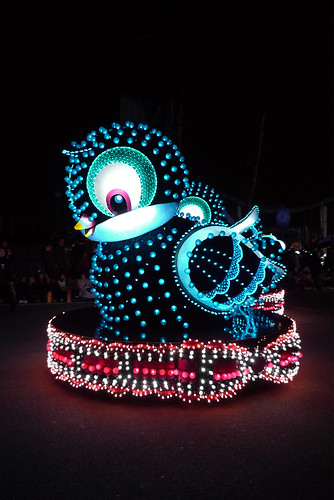 After the Arabian Nights section begins a elegant and beautiful Cinderella section.  Introducing the new unit are these birds. 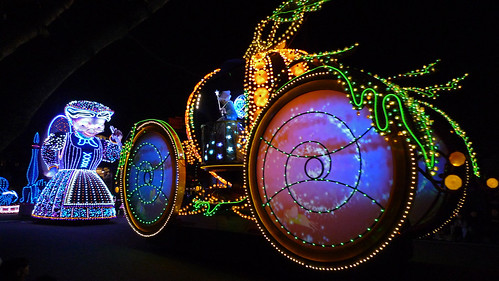 Here you can see two of the more spectacular elements, the Fairy God Mother in the background, and in the foreground is the Pumpkin Carriage.  The wheels of the pumpkin carriage serves as giant projection screens that make a great effect. 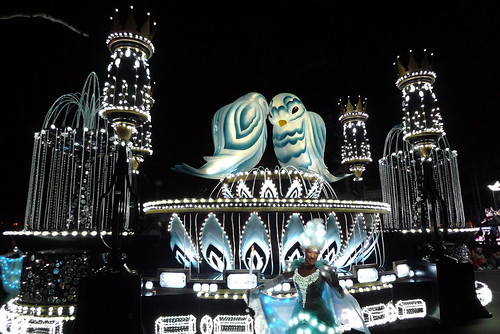 Using romance, elegance, and beauty make the Cinderella portion my favorite of the whole parade.  Above we see two “love doves” circling above a fountain.

The parade concludes with Cinderella and Prince Charming with a glass slipper.  A terrific ending to a decent parade.

So my thoughts on the parade:  It looks like a real winner.  While by no means does it look nearly as grand as Tokyo Disneyland’s Electrical Parade Dreamlights, it still does a sufficient job of creating a good nighttime atmosphere that makes people stay at a park longer.  The lighting effects are nice, and the floats themself are huge.

I do find it very odd though that the park tackled these choices.  When someone thinks of Universal, by no means do they think of Alice in Wonderland, or Cinderella, not even Arabian Nights.  Cinderella and Alice in Wonderland are already Disney classics but even Arabian Nights seems a bit outlandish for a Universal Park.  Eitherway, this looks far superior to what Universal Studios Hollywood has to offer for nighttime entertainment, oh wait….

Thanks for reading, leave your comments and park thoughts!