Posted on September 7, 2009 in News by Justice
2 Comments

Today marks the final day of Big Bad Wolf’s operation.  After having a 25 year run, Busch Gardens Europe decided to dismantle the ride for unknown purposes.  Big Bad Wolf had an incredible history and will be burned into several enthusiasts’ minds for decades to come. Opened in 1984, Big Bad Wolf was the first Arrow Suspended Coaster that didn’t rip itself apart.  To maintain the theming Busch Gardens had to offer, the designers of the ride included a village scene where the coaster raced through an Alpine Village.  Riders would fly by several unique facades and curve with the landscape along the 2800 foot track. 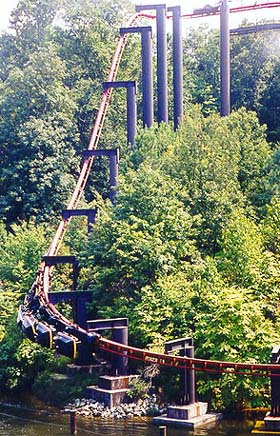 As the train left the village, it began its decent up a long lift hill before making a gentle turn and plummeting to the earth.  This drop is what the Big Bad Wolf is known for and is one of the most photographed elements on any coaster.  Big Bad Wolf’s 80 foot drop immediately turned into a 90 degree banked turn and headed back up the hill before returning to the station.

Big Bad Wolf’s final hours are slowly winding down.  The park promised that anyone in line before park closing will be able to ride, however, the final ride has been auctioned off to the highest bidders, and proceeds will go to help save Mexican Grey Wolves.

Thank you for reading.  Leave your comments and park thoughts below.