Since I am a big Disney nerd, I felt it was necessary to prove myself at the D23 Expo in Anaheim California.  D23 is the official Disney fan community for everything from the parks, to the movies, and I was there, for 1 day at least.  I attended the incredible event Saturday, September 12th, 2009, and needless to say that I was overwhelmed.  A truly spectacular sight that any Disney fan would appreciate. 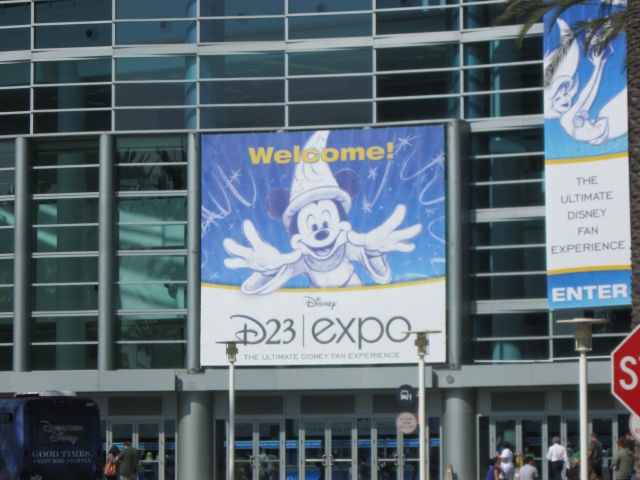 Approaching the Expo you are immediately greeted by what has come to be the logo of the D23 Expo.  This Sorcerer Mickey reaching out can be found on the guidebooks, pins, shirts, and several other signs.  As I approached it, it finally hit me that “I was here.”  I wasn’t looking at pictures from other people, I was there.  This was the magical. 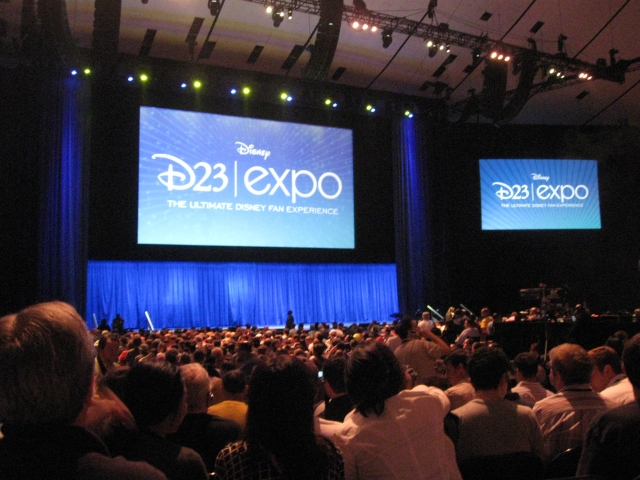 The D23 Arena as the audience waits for the speaker, Jay Rasulo, to come out.

As soon as I arrived, I redeemed my online Ticket, received a wrist band, and headed straight to the D23 arena.  Here they would be holding an event where Jay Rasulo would discuss the future of Disney’s Parks and Resorts.  Luckily, I got in line about 10 people before they cut off the line.  I entered the 4,000 seat, packed to the house, arena and took my place.  A slide show of different pictures, concept arts, and renderings were on display on the main screen. 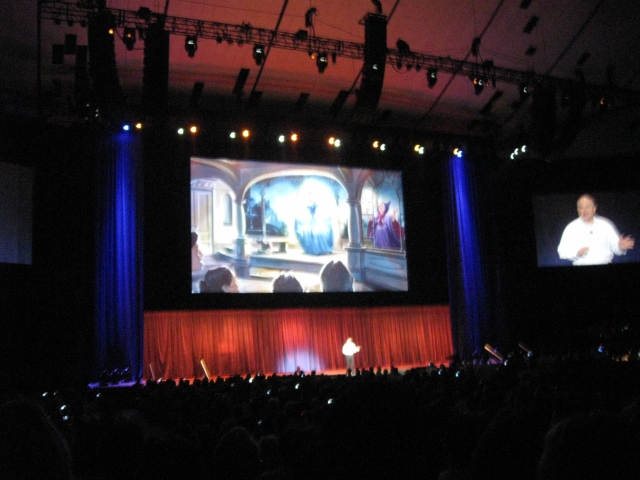 When the event began, Jay Rasulo came out and did a short introduction to himself.  He discussed how Disney Parks and Resorts fall into 4 categories, Fantasy, Adventure, New Frontiers, and Tomorrow.  First stop was Fantasy.  He began by saying “There have been alot of rumors on the internet, I don’t know where they come from, about a so-called ‘Fantasyland Expansion’.  Well I am here to report that these rumors are completely true!”  The crowd applauded thunderously.

This new expansion will focus mainly around your favorite Disney Princesses.  Guests will get to go into Cinderella’s house and take a tour with the Fairy God Mother.  Also, come to Sleeping Beauty’s cottage and help throw her a Sweet 16!  Why didn’t she have a 16th Birthday party?  Because she was sleeping of course!  Tiny Beauty’s will get to design cards and play with one of their favorite princesses.  Pixie Hollow will also come home to Fantasyland.  Fairies to-be will shrink down to the size of Tink and join her and her friends in a world like no other.

Dumbo remains one of the most popular attractions in all of the Magic Kingdom.  As a result, Disney is doubling the size of Dumbo by building two carousels side by side.  This will reduce wait times in the line, if there was a line.   Instead of guests waiting in line, waiters will go from booth to booth playing different games under the big top.  Guests will be waiting for the attraction, without waiting.

The crowning jewel of the Fantasyland Make over will be the Little Mermaid . “It’s a true E-Ticket,” Jay Rasulo stated.  Direct from the upcoming Disney’s California Adventure version, this will feature a similar ride but with a much different facade.  Instead of entering a 1920’s dark ride facade, voyagers will go through Prince Eric’s Castle.  Voyage of the Little Mermaid is guaranteed to be a hit among guests.

The Disney Cruise line will be expanding its fleet by adding two new cruise ships, each 50% larger then their predecessors.

Next up, Jay Rasulo discussed “Adventure”.  Two of Disney’s more popular programs, the Disney Cruiseline and Adventures by Disney would be expanding greatly.  The Disney Wonder, one of Disney’s 4 cruise ships (2 under construction) will be moving permenantly to the West Coast in 2011 with trips to Mexico, Alaska, and several other exotic places.

Adventures by Disney is a vacation program where families, couples, and kids, all get to take a guided tour through a destination with a well trained Adventure by Disney guide.  Weather it is riding a gondola in Venice, Italy, or hiking the base of the Matterhorn in Switzerland, Adventures by Disney has something to offer for you. Disney's new resort and hotel will be brand new for Disney.

One of Disney’s newest concepts is their resort coming to Hawaii.  Unlike any other resort, Disney’s Hawaiian Resort will offer an incredible experience about the culture, the history, the legends, and the myths of Hawaii and its mighty islands.  Featuring intricate architecture, water slides, lush landscaping, and lots more, this resort is something you will definitely want to think about on your next trip to the Hawaiian Islands. 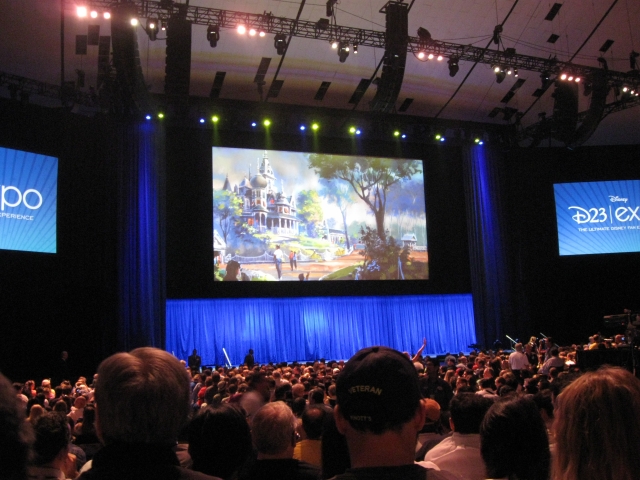 Part of the Hong Kong Disneyland expansion will be Mystic Point, a brand new land featuring a world class dark ride, and the Adventurer's Club, a terrific themed eatery.

Now it was time to discuss New Frontiers!  Things like China are brand new territory for Disney.  Hong Kong Disneyland has just celebrated its 4th anniversary and is now gearing up for a massive expansion. Including 3 new lands and several new attractions, this expansion will put Hong Kong Disneyland on the map for its uniqueness as none of these 3 lands are heading to the american parks.

Grizzly Trail will feature Grizzly Mountain Coaster, a wildly fun adventure through the mine shafts of the mysterious mountain.

Rasulo stated that “Grizzly Mountain Coaster will combine some of our best coaster ride systems; the launch of Screamin, the backwards elements of Expedition Everest.”  Surely, this coaster just got alot more interesting.

With inspiration from Haunted Mansion, Tower of Terror (Tokyo DisneySea), the Adventurer’s Club and several other attractions, Mystic Point will showcase perhaps what will be the best ride ever created.

The fun at Hong Kong Disneyland is tentatively set to begin in 2013, with the opening of Mystic Manor as well as the opening of the other two lands, Toy Story Land, and Grizzly Trail prior.

Finally, it is time to head back to where it all began, the Disneyland Resort.  Jay Rasulo talked about the upcoming expansion coming to the Disneyland Resort.  While no major announcements were made, he did in fact reveal some very interesting video animation that the imagineers use to visualize ride attractions.  Mint Crocodile has a great video of it on YouTube.

This shows video of Radiator Springs Racers.  Jay Rasulo strictly stated that these are not perfect, as the details are polished, the voices are provided by Imagineers, and changes are often made.  Never have these tests ever been revealed to the public until now.

A new adventure beckons you in 2011 at Disneyland and Disney's Hollywood Studios.

However the big news came with the announcement of an all new update of a beloved Disney attraction.  With the oncoming of 40 or so Storm Troopers, everyone knew exactly what was about to happen.  Jay Rasulo continued to announce that in October of 2010, Star Tours will close before reopening in 2011 as Star Tours II.

While this announcement was long expected, what was not expected was the sneak preview the audience received.  Rasulo asked everyone to put on their Real-D 3D glasses and turn their attention towards the massive screen in the center.  An exhilarating preview of the new cabin movie was shown and Disney was kind enough to post it online.

That concluded the ceremony and as a gift, everyone who attended the event recieved an exclusive Star Tours II poster.  Mine was cool enough to feature C3PO and said “Here we go again.”  What a terrific ceremony!

Next update, we will go into the Parks and Resorts exhibit to see what it has to offer!

Thanks for reading.  Check back later to see more.  Leave your comments and park thoughts.