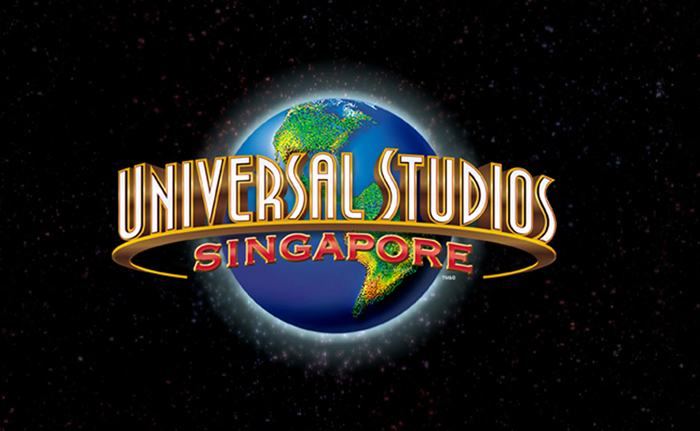 Recently, the upcoming Univesral Studios Singapore park, announced 2 new areas.  Both based on hit Dreamworks Animation movies, both areas are sure to be a hit with the young and the young at heart.  Providing incredible theming, unique attractions, and high quality atmosphere, this park is shaping up to be the sleeper hit of 2010.  Lets take a look at what the park recently announced.

A conceptual overview of the two upcoming lands.

Above, you can see an artist’s rendering of the two new lands.  On the right is Far Far Away.  Inspirired by the now, famous, Shrek series, Far Far Away takes you into the city of Fiona’s Royal Palace and offers a handful of different attractions.  On the left is Madagascar.  In the rich, colorful vegetation of Africa, guests will get to join their 4 favorite lovable characters (Alex, the lion; Marty, the zebra; Melman, the giraffe; Gloria, the hippo) in great adventures inspired by the original movie Madagascar. 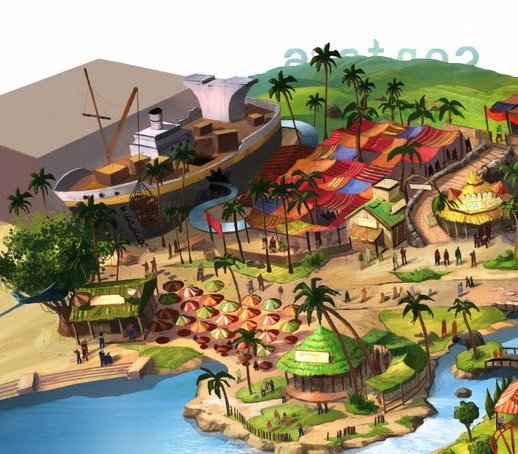 Madagascar features two rides, one shop, and several other suprises yet to be announced.

Here, we can zoom in and see the two main attractions of the Madagascar area.  The star ride of Madagascar will be Madagascar: A Crate Adventure.  In this slow moving boat dark ride, riders will make join in the Journey based on the 2005 plot.  Park officials promise ground breaking technologies to be included in this ride with state of the art animatronics as well!  With a fiery ending, Madagascar: A Crate Adventure is sure to be a ride to look out for. 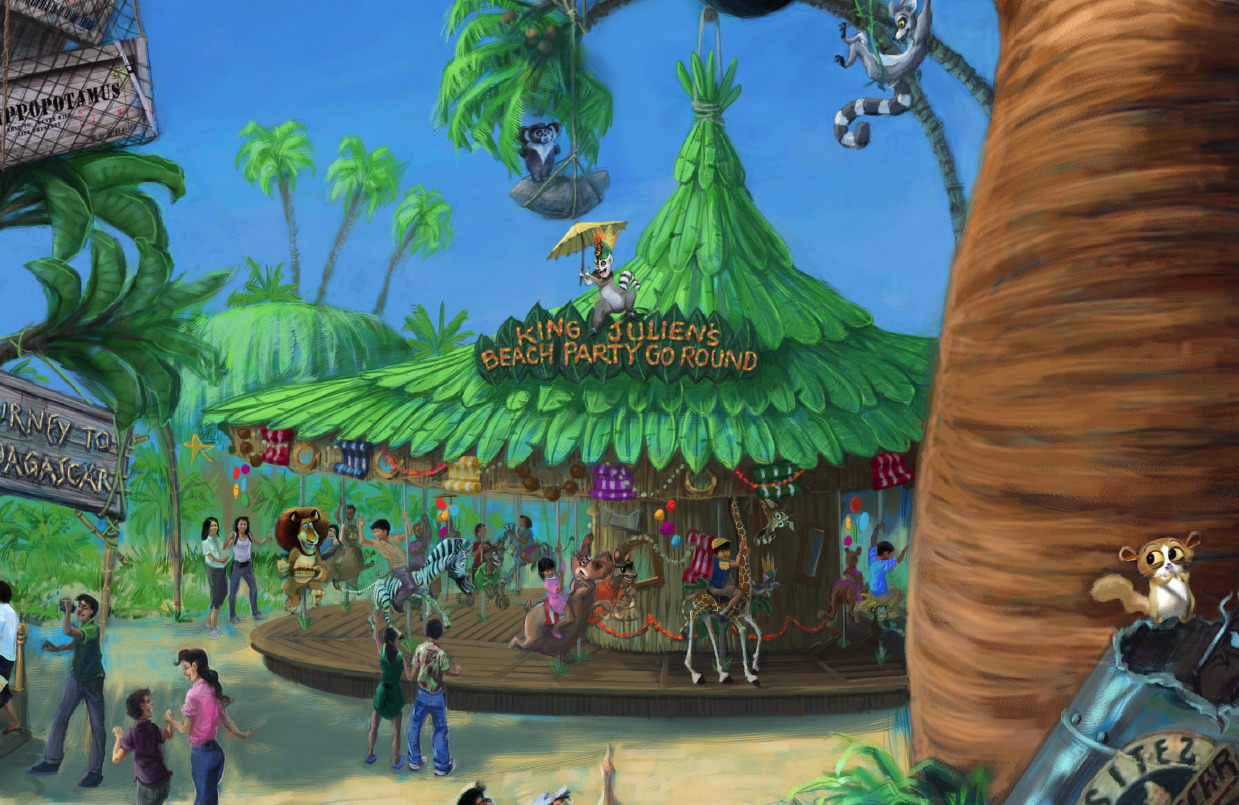 King Juelien's Beach Party-Go Round is a wildly themed carousel like no other.

Supporting the area will be King Juelien’s Beach Party-Go Round.  Do not let the title decieve you as this is not your average attraction.  Recreating the scene from the 2005 movie where King Juelien and his animal friends celebrate the arrival of their newly founded New York buddies.  With wild and crazy music, it seems like this will be a family hit. 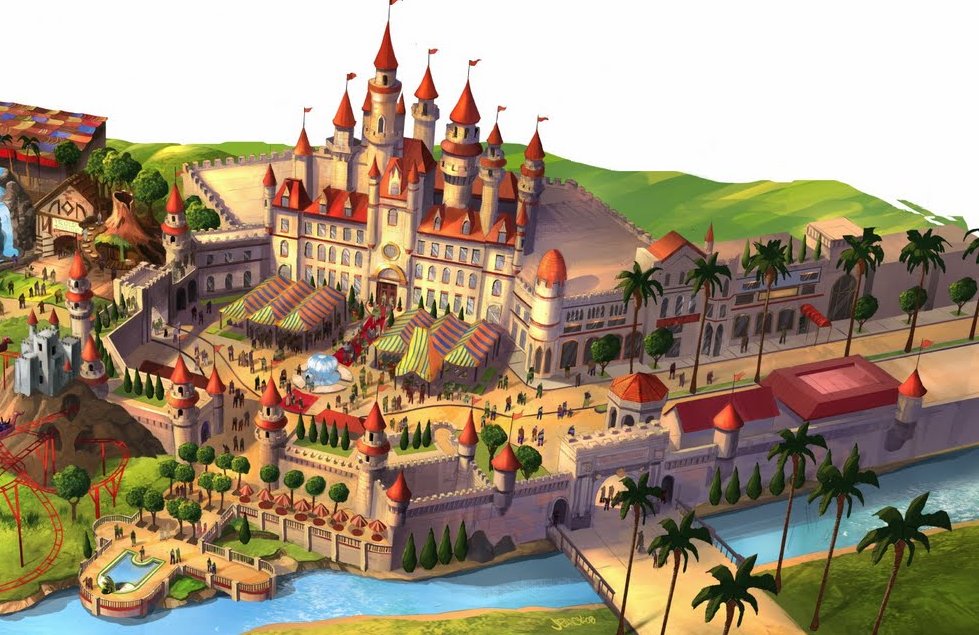 Far Far Away is a terrific concept that has finally come to reality!

In the Shrek movies, Princess Fiona’s family lives in the vast Kingdom of Far Far Away, a nod to present day Hollywood.  Having more then four rides, and over ten shops and restaurants be on the look out for this upcoming area.  The center piece of the original area is Far Far Away Castle which will hold the ever so popular Shrek 4D attraction, direct from the American parks.  On Magical Potion Spin, park goers will get to board the giant pots that the Fairy God Mother’s factory operates on in this minature ferris wheel.

What attraction that has me really excited is Donkey Live.  Similar to Turtle Talk with Crush at both Disney’s California Adventure and EPCOT, in a small, intimate theater, the audience can sing, play, and even talk with Shrek’s lovable side kick, Donkey.  It will be interesting to see how this comes out from a non Disney company. 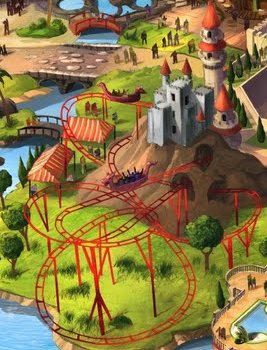 Enchanted Airways will be a junior coaster that provides thrills for the little ones.

Something that every park needs is a Junior coaster and Universal Studios Singapore gets that idea.  Echanted Airways will be a family friendly, gentle coaster ride along the back of Donkey’s beloved dragon.  A flight over Far Far Away and beyond will make this roller coaster very popular with the smaller audience.

So what do I think of all of this?  I think that Universal Studios Singapore is shaping out to be amazing.  It is more like Islands of Adventure then it is any of the other Universal Studios parks.  The theming looks incredible and the atmosphere will be very high class.  So what do you think of these new additions?  Leave your comments and park thoughts.