Posted on September 27, 2009 in Halloween, Polls by Ethan
0 Comments

In this week’s poll we asked you if you would be attending a theme park Halloween event this year.  An overwhelming 71% of the voters said that they are, with 6 out of 19 people going to multiple events. Not even counting the 5 people who said “Maybe”

Will you be attending a theme park halloween event this year?

This week we also introduced a new part of the weekly poll, a Twitter Poll!  We simply add to the main poll by asking our twitter users a question and allowing them to @ reply their answers:

We asked our followers, Which Halloween events are you attending this year? 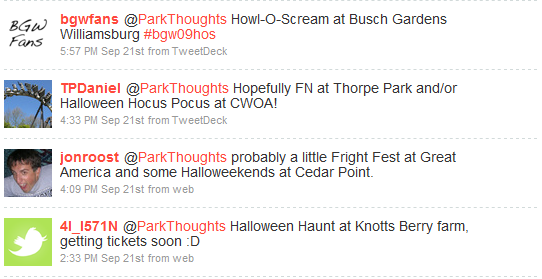 What are you’re thoughts on this weeks poll results? Leave your comments and park thoughts!