Posted on October 5, 2009 in Halloween, News by Justice
0 Comments 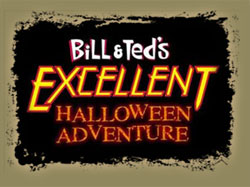 At Universal Studios in Hollywood, CA, during the Halloween Horror Nights event, the popular Bill and Ted’s Excellent Adventure show caught fire.  The theater is new for the 2009 show Creature from the Black Lagoon and has been running fireworks inside the theater for several months now.  However, during one performance of the stage show, a firework shot off and ignited one of the props.

While no one was hurt, nor was any damage done, it did cause the entire theater to be evacuated and the following show to be delayed.  Luckily, someone caught the entire thing on tape.  The show is rated PG-13 so watch at your own risk.  Leave your comments and park thoughts.