Premier Rides finally revealed the layout for Kennywood’s upcoming Premier LSM launch coaster at the Euro Attractions Show in Amsterdam. I was actually really surprised when I saw the layout, not only is it much longer than I expected, but also contains some really unique elements. 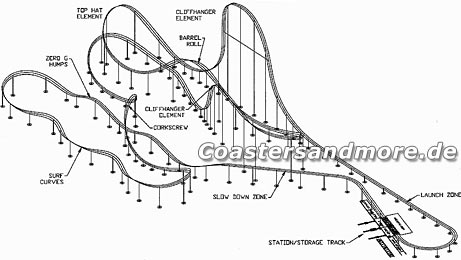 The ride begins with an 50 mph launch up a hill to the ride’s highest point, the train will drop back down to earth at a 90 degree angle entering an element called an inverted top hat, which I see as being similar to the overbank on Wicked at Lagoon, this is followed by a barrel roll which then leads to something called a “cliffhanger element.” This is followed by a corkscrew and an element called “surf curves,” which I assume is like a flat version of the finale of Storm Runner at HersheyPark. The ride then ends with two small airtime hills.

This could be, if done properly, be one of the best launch coaster layouts. It contains all of the elements to make it a truly amazing ride.

What do you think of the layout? Leave your comments and Park Thoughts!