Posted on February 11, 2010 in Uncategorized by Justice
2 Comments

Its still the middle of the off season so like, so many thousands of other people, I have yet to renew my season pass.  Well very recently, I went to my mail and found that Six Flags Discovery Kingdom sent me my 2010 Season Pass, the real thing, already printed and everything.  At first I thought it was a mistake but then I began to read….

On top of my season pass was a sticker instructing me that all I had to do to activate my season pass was go online, buy the pass, fill in my information, and it would be activated.  That’s it.  No hassle of going to the park standing in line to get your picture taken, ect.  Six Flags has given me my ticket, I just need to pay for it.

Maybe I am the only one, but I feel this is genius.  For those who either forgot about renewing their season pass or were have second thoughts about getting one because they did not know when they would be going out, this is giving them the pass and removing most of the effort on your part.  Bravo Six Flags.  Bravo.

So do you think this is marketing genius!?  Leave a comment with your Park Thoughts! 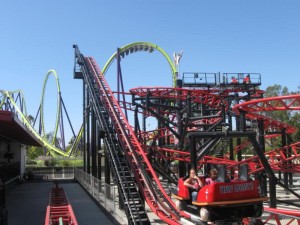