S&S Worldwide has unveiled plans to debut a new 4th Dimension coaster in China.  The one of a kind coaster style will open in Changzhou, China as part of the upcoming, Dinosaur Park.  This will be only the third time a 4th Dimension coaster has opened up in the world, with the other two being X2 in Six Flags Magic Mountain, and Eejanaika in Fuji-Q Highlands.

The 4th Dimension coaster is a experience that is unmatched by anything in nature.  Each train has 2 couplets of seats that extend over the track and hover over the air.  When in the upright position, the trains face backwards.  However, these vehicles have the ability to rotate 360 degrees vertically, meaning you are in for an awesome experience.  As an example, when the car is going straight down, the cars can rotate so your face is pointing directly towards the ground. 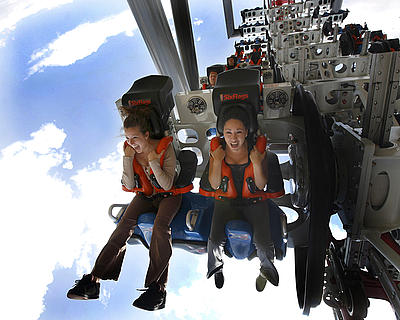 I do not know much about Dinosaur Park in China, but considering the fact that they are investing in a S&S Worldwide 4D coaster, the park has clearly been put on the map for many roller coaster enthusiast.  We recently did an article that described one of the parks other roller coasters, a Dinosaur themed motor bike.  From the looks of it, this park appears to be taking as many unique concepts as possible and putting them in one park.

My thoughts on this?  I personally loved X2 at Six Flags Magic Mountain and it is by far the most intense, frightening, and extreme coaster experience I have ever had.  However, I have met several people who would completely disagree with my opinion and think it is one of the most hurtful rides in the world. It is going to be interesting to see how the Chinese audience responds to this and how it compares to the American and Japanese views.

Another big question is what will the layout of this ride be?  Will it clone one of the previous 4th Dimension coaster’s layouts.  Or has S&S designed a completely new map for this ride.  Considering that X2 and Eejanaika share quite similar layouts, I can tell you that many coaster fans are hoping for something totally unique.

So, what are your thoughts on this!  Leave a comment with your Park Thoughts!