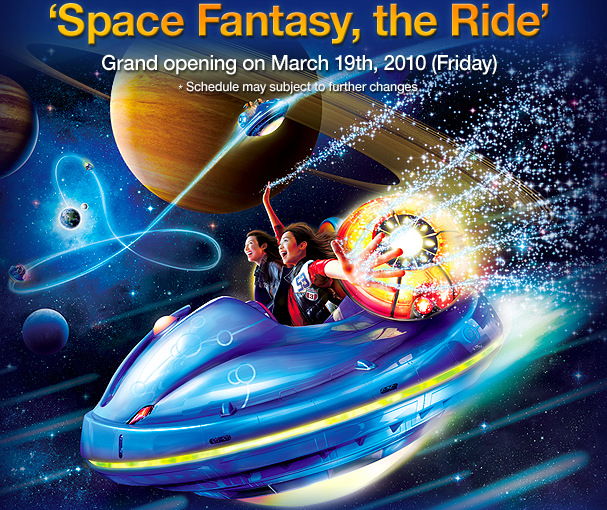 This intergalactic adventure takes home of the former site of ET Adventure, a very popular dark ride that opened along with the rest of the park in 2001.  The new ride’s story is that each guests boards a space ship and goes on a mission to save the sun.   Space voyagers will get up close and personal with the stars and asteroids that could explode at any given moment.  The finale of the ride will be an encounter with the sun where guests go into the blazing ball of gas. 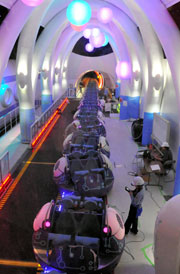 An article was just release and it features a picture of the coaster’s station.  Here you can see the extremely well themed trains (2 cars per a UFO), and it is also visible that the park will be utilizing the new system of the moving station platform.  After doing some investigating on Mack’s Spinning Coaster page of their website, it becomes even more evident that the ride is a Mack creation.  The web page advertises “Spinning – the combonation of free or controlled”.  Knowing Universal Japan’s love for high quality, I am sure that the ride will feature some dark ride portions in the beginning of the ride with controlled spinning before going into the main coaster portion with free spinning.  Also, early concept art of the ride shows an a like character.  Characters + 4.5 minute length + Controlled and Freely Spinning Cars must equal a very in depth story.  Unfortunately still very little is known about this ride, but in these coming weeks as we get closer and closer to it’s March 19th opening, more videos, pictures, and information will surface.  I for one, cannot wait to see this ride.

Space Fantasy comes after a long history of additions in the past year.  In 2007 the park opened Hollywood Dream: the Ride, a B&M Hyper coaster and last year the park debuted the massive Magical Starlight Parade.  So will this be a good addition?  Leave a comment with your Park Thoughts below.