In 2006, Six Flags Magic Mountain introduced Tatsu, a massive Bolliger & Mabillard flying coaster.  While the park already had some extreme coasters, such as X (prior to the X2 transformation), Goliath, Scream and Riddler’s Revenge.  However, the highlight of each of my visits, is riding on the intense and menacing Flying Beast. What some would call a gimmick, I have found that the flying style position provides for a truly unique and exciting experience.  And Tatsu puts the thrill in thrill ride.

Tatsu made it’s debut on May 13, 2006.  The twisted track of this coaster is custom designed for this park; curving with the terrain, winding through icons, and of jumping in and out of the tree line.  Since the ride has opened, no other flying coaster has been able to match it’s 170 foot height, it’s 111 foot drop, or it 62 mph an hour top speed making it the tallest and fastest flying roller coaster in the entire world.

Approaching the ride, you enter under the grand sign with a huge red dragon holding the ride’s logo.  From here, guests wind through the switch backs.  In the hot desert of Valencia, California, the blazing sun shines on guests but thankfully mist blows down onto awaiting riders and the sauna like atmosphere only builds to the excitement.  The traditional Japanese is blown through the speakers before guests are finally assigned to one side of the dual station.  Finally, the dragon arrives and the cars flip right side up for guests to board.

The lift hill is one of the most suspenseful I have ever experienced.

Slowly, the chain lift hulls each train up the 170 foot climb.  Riders are facing straight down towards the ground, which is seemingly miles below you.  Nothing obstructs rider’s views down towards the onlooking spectators below.  The climb is only a matter of seconds but seems like an eternity as Tatsu decides your fate.

After cresting the top of the chain lift, immediately the ride does a 180 degree diving turn towards the ground before immediately going into 103′ Corkscrew over the station.  The train dives down before rising once again and flying through a 90′ Zero-G Roll.  Still at speeds of over 50 mph, the ride has not lost any of it’s pace at all.

The 32 passenger train now rises towards the heavens and bends in a very unusual way in what is known as the horse shoe turn.  This is an experience that cannot be felt on any other style of ride.  The sensation is a combination of air time, and excitement. 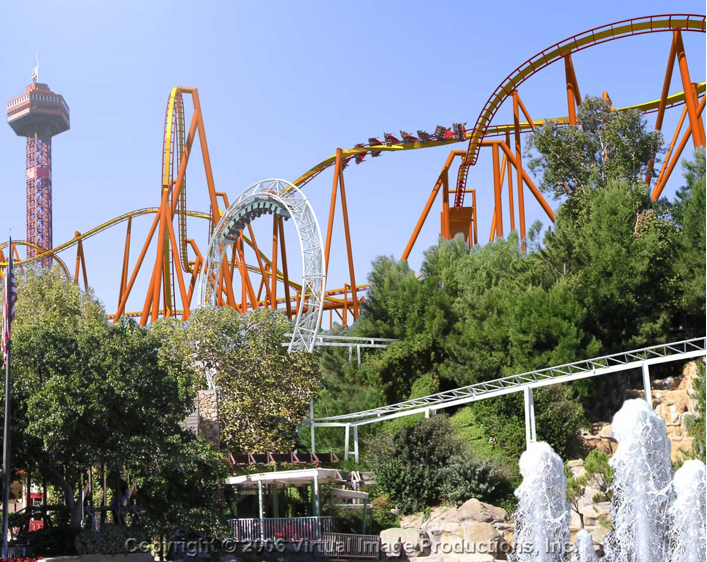 Following the egg turn is the most intense climax of any coaster in Southern California.

The most under appreciated section of Tatsu is immediately after the egg turn.  Here the train goes into an immediate turn that is so forceful, it is the 2nd most intense part of this ride.  Riders bank over 90 degrees and towards the sky before pushed straight towards the tips of the trees below in this intense experience.

Next is simply put, the most unique roller coaster element ever.  The 124′ Pretzel Loop is the biggest of it’s kind and the highlight of the ride.  It is the epicenter of thrilling and provides an almost “high” like sensation.  In one instant you are being pushed out of your seat by the force of gravity and are slowly going over the top of the hill.  However, in the next, riders are heading straight down, head first and being thrown back into the back rests of their seats.   After diving below the tree line, the coaster re-emerges into the sky in the 2nd half of the pretzel loop.

Tatsu comes to an end with a 90 degree turn into a inline twists and into one final 270 degree turn around the park’s entry plaza.  While quite slow, it is certainly an appropriate ending to one of the most fantastic rides in the western United States.

There is no other ride in the park that even compares to some of the unique sensations, and forces that can only be experienced on Tatsu.  While it is on the short side, it is most definitely worth the 2 hour wait that can be found on the average summer day.

Tatsu is more then a gimmick coaster designed to hold a record, it utlizes it’s surroundings to become the best coaster of it’s kind and unmatchable by any other yet.  Six Flags Magic Mountain certainly has a reputation for possessing some of the most extreme coasters in the world,  yet none is matched by Tatsu.