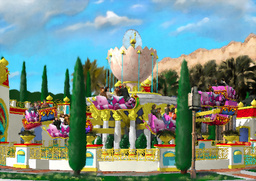 Personally, this is actually nerve racking news to many Tokyo DisneySea fans.  I found out about this new attraction through a forum thread that was titled “Stupid New Ride” and that is how I feel as well.  The Oriental Land Company (owners of Tokyo Disney Resort) have always provided the highest quality with Tokyo DisneySea and unfortunately that quality seems to be in a slight decline recently.

The announcement of modern day toys entering a 1920’s New York area is a bit disconcerning.  Turtle Talk was not exactly well-recieved by some fans and now it appears that just a new Dumbo is coming to the park.  While, yes all of these rides are/will be exceptionally done it is concerning that the OLC feels that these kind of attractions suddenly belong in the park.

And for many Disney fans such as myself, this new ride means the departure of the most high energy show ever, Bonfire Dance.  Only time will tell if this new ride is a hiccup in the park’s history or a sign of things to come.