Posted on January 11, 2011 in Uncategorized by Justice
2 Comments

ProSlide Technology Inc based in Canada is one of the world’s leaders in water park attractions.  They are the creators of many iconic water slides such as the Tornado, Bowl, Plummet, and so on.  2010 was a great year for the company as they built the new Wildebeest water coaster at Holiday World & Splashin’ Safari which took the crown as best water slide in the world, beating the long standing Master Blaster at Schlitterbahn.  2011 will bring many new additions from the company across the world.  But will it top 2010? 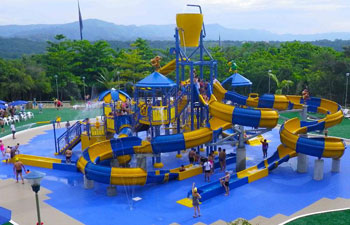 One of ProSlide’s latest creations, the RideHOUSE is the company answer’s to rival companies water play structures featuring dump buckets, as well as a variety of RideHOUSE style slides: DECKtops, GangSlide, and Tunnel Twister.  The one shown in the image to the right is of a Columbian water park in Central America.  However, Splashin’ Safari, Holiday World’s water park neighbor has announced that the park will continue their partnership with ProSlide by adding Safari Sam’s Splash Land, a RideHOUSE that will feature 8 (yes, eight) water slides.  So something twice the size of the image to the right.  The addition is geared towards the younger ones in the family after the past two years, the park added two major thrill rides, Wildebeest, the world’s #1 water coaster, and Pilgrim’s Plunge, a flat out epic water flume. 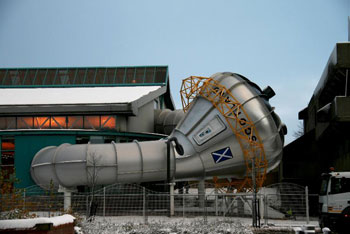 Another popular ProSlide addition for 2011 are the various Proslide TANTRUM slides.  Coming in several different models, the TANTRUM concept is a variation on the popular Tornado slide concept where riders go into a giant funnel.  While the funnel idea was kept, the funnel itself was drastically cut in size allowing for multiple funnels throughout the ride.  This allows for more twists and turns throughout the water slide before and/or after the funnel element.  Personally I think these are much better concepts than the original Tornado which typically consisted of 1-2 turns before the funnel and if you are lucky, a turn after that.  TANTRUM’s are relatively new to the water park industry being just introduced a few years ago.  However, since their introduction, water parks have been purchasing at a rapid pace.  The example to the right is the first TANTRUM in Scottland.  It also looks very awesome.  Seeing that water park construction is much more rapid than theme park construction, don’t be surprised to hear about a TANTRUM’s showing up your local water park in Summer 2011.