Back in 2009 at the D23 Expo, Walt Disney World announced they would be doubling the size of their Fantasyland with “Fantasyland Forest”.  The original plans called for one cloned attraction, The Little Mermaid, two restaurants, both based on Beauty and the Beast, two Dumbos, and what seemed to be countless meet n greets.  While the attention looked far higher than anything else we have seen at the Magic Kingdom, there were complaints that the new Fantasyland was far to geared towards five year-old girls as oppose to a wider audience.  However, today the park released new details on the updates to the Fantasyland Expansion. Changes include the removal of several large structured Meet n Greets replaced with a 7 Dwarfs themed mine coaster, and the removal of Snow White’s Scary Tales to make way for the Princess Fairy Tale Hall. 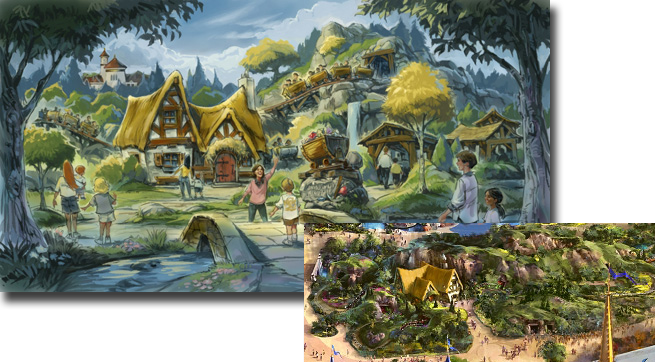 The higlight of the new addition is the 7 Dwarf themed mine coaster.  The coaster has been rumored  as far back as 2007 to be the next major attraction of the Magic Kingdom.  However the rumor did not come to be when the expansion was first announced.  Now however, a large plot of land previously occupied with Meet n Greets for Cinderella, Sleeping Beauty, and some other friends have been removed to make way for a new mine coaster themed to the 7 Dwarfs.  The coaster will be first of its kinds as the cars will sway side to side emphasizing on every twist and turn in the coaster.  The ride will take place both indoors and outside with lots of music.  Guests will venture into a mine “where a million diamonds shine.”  If it comes out similar to the concept art, I have no doubt it will be beautiful. 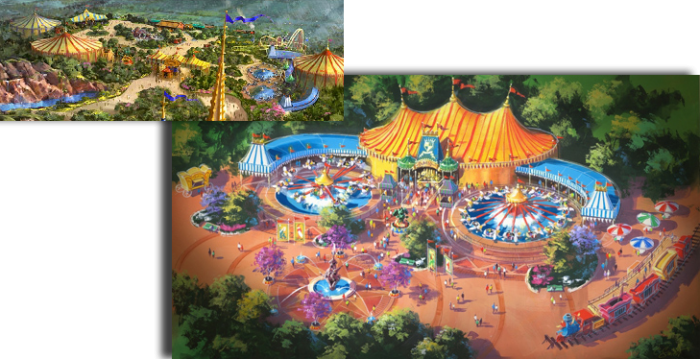 Other details that were revealed was surrounding what is now called ‘Storybook Circus’.  This area will be home to what is fan-titled ‘The Dueling Dumbos’ where two Dumbo carousels will soar through the air instead of one.  In addition guests waiting in line will get to join the circus with elaborate queue games that won’t even make guests feel like they are waiting. Goofy’s Barnstomer coaster in Toon Town Fair will receive a make over into Goofy as the Great Goofini.  Also, there appears to be new food cart themed to Casey Junior as well as other details throughout the circus themed area. 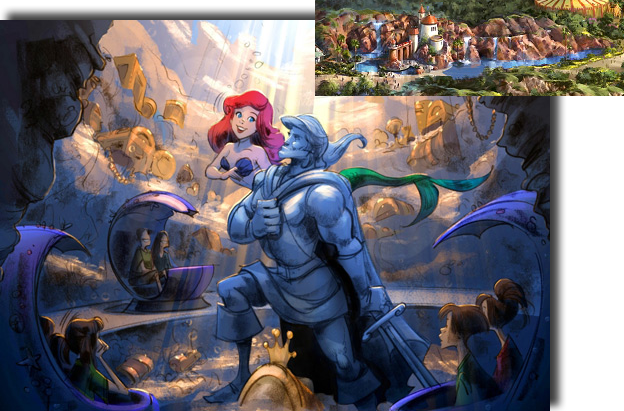 One attraction that hasn’t changed since the original announcement is Journey of the Little Mermaid.  The ride will be a clone of the one opening in just a few months at Disney California Adventure.  Construction is well under way to recreate Prince Eric’s castle and a beautiful sea side landscape.  The dark ride will use an OmniMover system where guest will travel in shells through the different scenes of the Little Mermaid. Guests will also be able to listen to the wonderful music from the movie as they ride through the different sets.  Scenes include: Under the Sea, Part of Your World, Kiss the Girl, Poor Unfortunate Souls and a few others.

Other additions include a new Beauty and the Beast restaurant that will serve as a counter service restaurant by day and table service at night.  In addition, next door will be Gaston’s Tavern, an additional counter service restaurant.  Princesses will not disappear entirely from the Fantaysland Forest expansion.  A new Princess meet n greet titled Princess Fairytale Hall will replace Snow White’s Scary Adventures in Fantasyland.  Also noteworthy, the previously announced Pixie Hollow subland has been removed from the expansion entirely.

To give an idea of how the plans have changed, below is the old (announced in 2009) and new (announced in 2011) expansion plans.  Definitely a huge difference! Disney will be holding a conference later tonight with more details.  We’ll be sure to keep you posted. 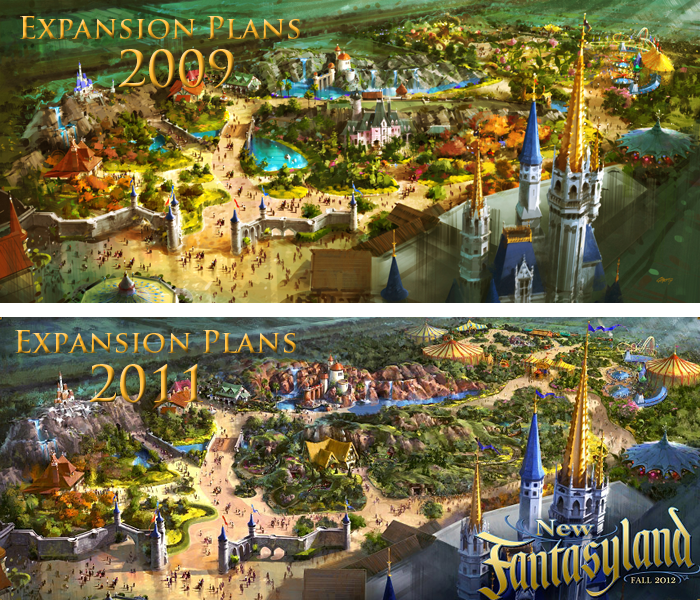