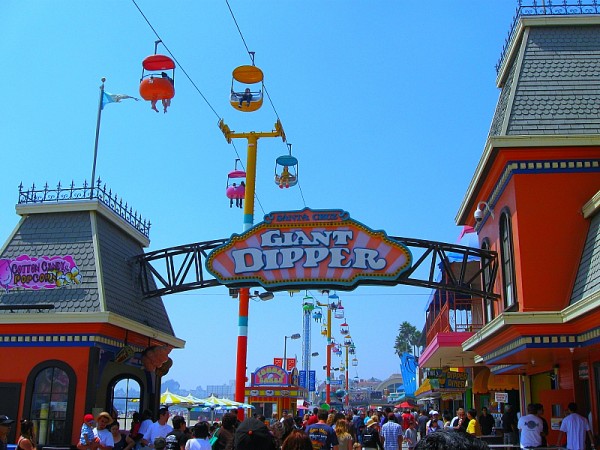 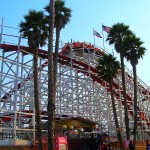 The Santa Cruz Beach Boardwalk is a west coast amusement park icon.  The crowd midway with the rickle and rattle of the multi-story attractions on one side and the crashing waves and whispers of the wind to the other.  And what has kept the Santa Cruz Beach Boardwalk alive for more than 100 years is the park’s famous wooden coaster, the Giant Dipper.  Constructed by Arthur Loof in 1924, the coaster is now the 5th oldest in the country.  But don’t let it’s age fool you, the coaster continues to pack a punch. Reaching speeds of 55 mph, heights of 70 feet, all over half a mile of track.

The Giant Dipper is really one of the best wooden coasters in the West.  The ride’s a non-stop thrill ride that is jam packed with plenty of turns and twists that idealize the turn of the century coaster.  The smell of deep fried cheese cakes, the shoulder to shoulder crowd, and the often long journey to the boardwalk is all worth while after riding the Giant Dipper. 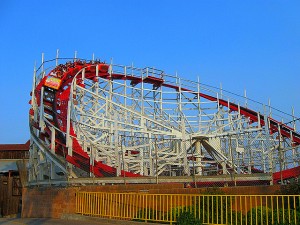 Upon entering the boardwalk I was immediately intrigued by locating the station.  Due to the limited space the Boardwalk occupies, the station to the coaster is nicely tucked away in the middle of the coaster’s massive support structure.  Guests enter under a large marquee above the midway that can be seen from essentially either end of the boardwalk.  First there is a small hall of switch backs before a gentle semi-circle incline that hugs the station.  Unlike most modern coasters, the Giant Dipper’s station is curve to the confines of the above turn around.  Crews quickly assign guests seating as guests are loaded like machine gun fire shooting out each of the two trains long before the other one rushes back into the station.

Once the ride begins, the coaster immediately dips into total darkness and winds in a few directions completely disorienting guests before they reach the light as well as the chain lift.  On the way to the top of the 65′ there is a great view of the Pacific Ocean and the thousands of happy park goers who come to explore the delightful sands.  As the train slowly crests the top of the hill, the train whips over the top of the hill and the real fun begins.

Perhaps this is only my own personal belief but I think that a wooden coaster is intedned to be rough.  I am a huge fan of 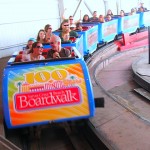 Ghostrider with this mentality and the same can be applied here.  Giant Dipper shows no mercy on it’s riders at the bottom of the first hill (especially in the back row) by thrusting riders into the seat.  The coaster pulls up and around in a 180 before 2 bunny hops into the mid course break run.  The coaster once again reverses directions heading back towards the lift and follows it’s original layout once more.  Towards the end the coaster bounces over numerous bunny hills directly providing some added fear.  Giant Dipper flies into the station seeming not to slow down until it reaches the loading dock. 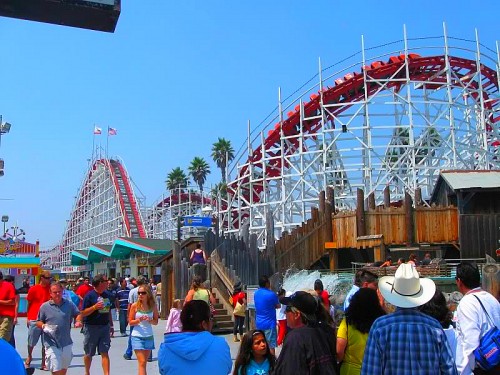 Santa Cruz Beach Boardwalk’s Giant Dipper is a great classic wooden coaster.  A true mark of it’s early design is the lack of banked turns.  The coaster for the most part does not seem to bank in any which direction more than 45 degrees, providing for some great lateral G-Forces.  While short, the coaster’s layout weaves over and under itself in a fashion that maximizes it’s length in the available space.  Fortunately, the Giant Dipper maintains it’s speed along it’s course providing for some nice airtime and butt to seat action.

Yes, the coaster does get a lot of praise, however there are still some flaws.  The old fashion train design is not tall person friendly with minimal leg room.  In addition the coaster is quite pricey for one time riders (listed at $4.50 per a ride as of January 2011).  So if you going to hit up the Santa Cruz Beach Boardwalk, even for just a couple of hours, it is worth getting a day-long wrist band.

Overall, the Giant Dipper at the Santa Cruz Beach Boardwalk is a really solid coaster.  It’s a shining star in the Pacific Coast park and is far better than it’s sister at Belmont Park in San Diego.  Although, other wooden coasters including Roar!, Termina…er…. Apocalypse, and Ghostrider are all better, the Giant Dipper is unique for it’s classical design.  I would give the coaster a 6 out of 10 being above average, but still not great.