After the giant success at SeaWorld Orlando, in May 2012, SeaWorld San Antonio wil open their own version of SeaWorld’s Water Park, Aquatica.  Like it’s Floridian counter part, Aquatica San Antonio will combine unique animal encounters with thrilling water adventures.  Inspired by the South Seas Islands, the new water park will feature white sandy beaches throughout the parks along with tropical floral to immerse guests into the experience.  The park’s signature animal, the Manta will also be represented throughout the park.

According to the official Aquatica website, the water park will open with eight different water slides:

Stingray Rapids – The park’s signature attraction takes five-seat rafts down twists and turns to an underwater grotto, where you come face-to-fin with stingrays and tropical fish. It’s the only ride of its kind in the world.

Wahalla Wave – A first of its kind in North America, this family raft ride sends guests soaring through watery waves to the top of a zero-gravity wall, giving riders the sense of weightlessness.

HooRoo Run – One of the park’s most exhilarating rides, guests choose single or double tubes for their decent down a 48-foot tall ride, which features open and closed slides, water curtains, and lots of twists, turns, and drops.

Tassie’s Twisters – Guests ride using double or single tubes and select one of two different slides, both of which send riders spinning inside of a large bowl before their twisting, turning descent.

Whanau Way – Guests ride single tubes down one of two distinct, heart-pounding slides. For the adventurous rider, one of the tubes is pitch dark.

Loggerhead Lane – Hop in a tube, swim, walk or float and enjoy a relaxing time along a winding, 1,200-foot-long water route enhanced by tunnel jets, foam shooters and misters.

Big Surf Shores – The avid body surfer can kick it up at this huge wave pool where guests splash in over 400,000 gallons of water with swells of up to 5 feet. 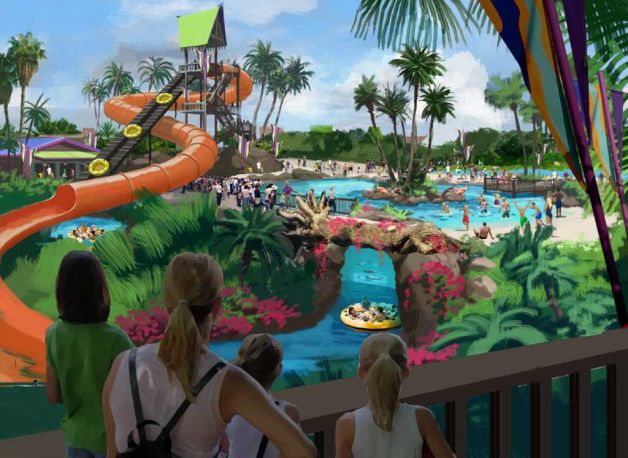 In addition the park will have a lazy river, Sting Ray interaction pool, childrens play area, water play tower, and plenty of other ammenities to satisfy your vacation needs.

Aquatica at SeaWorld San Antonio is set to open in May 2012 with preparations already underway.  Will it be long before we see an Aquatica on the west coast? Leave a comment with your Park Thoughts below.