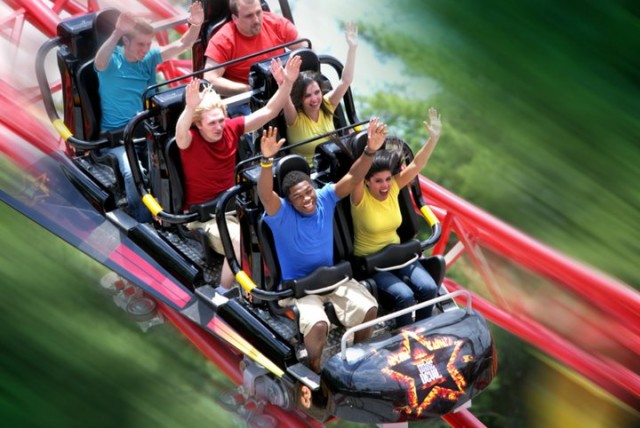 The third Euro-Fighter in the United States, Dare Devil Dive, is now open at Six Flags Over Georgia.

New for 2011, Dare Devil Dive at Six Flags Over Georgia is just the third Euro-Fighter to open in the United States.  Beginning with a 90-degree incline, the cars crest the lift before dropping down a beyond vertical drop accelerating to 52 mph.  What follows is easily one of the most twisted rides I have ever seen.  The first half of the ride feels like it was designed by a new-comer to No Limits (which is by no means bad).  The airtime is supposedly great and is an excellent “supporting-role” coaster to the park.

What I find to be the most interesting aspect about the ride is the new style.  The coaster completely differentiates from previous EuroFighters with a 3-spine track on almost the entire ride.  In addition, the new cars are arranged in 3 rows of 2 for a total of 6 passengers vs the 2 rows of eight in the 8-passenger old trains.  However, despite the lowered capacity, the new restraints feature lap bars that allow for a greater sense of freedom never before experienced on this type of coaster.  At some point, is this even still a EuroFighter?

Despite the terminology used to describe the coaster, I expect Dare Devil Diver to be the sleeper hit of 2011 similar to Sky Rocket in 2011.  While it may not get too much attention, it is a welcome addition to the already popular park.  Could we see more of these coasters added to other Six Flags parks in the near future? I sure hope so.  Leave a comment with your Park Thoughts below.