It’s been a while since I visited my home park, California’s Great America, opening day in fact.  However, with very little happening in the park since, I felt no rush to return to the park.  With some friends I made a visit today, with picture taking, new gathering, etc not being a priority.  In addition, activity is minimal on property with little to no note-worthy news available for posting.  However one ride at the park continues to be plagued with problems. 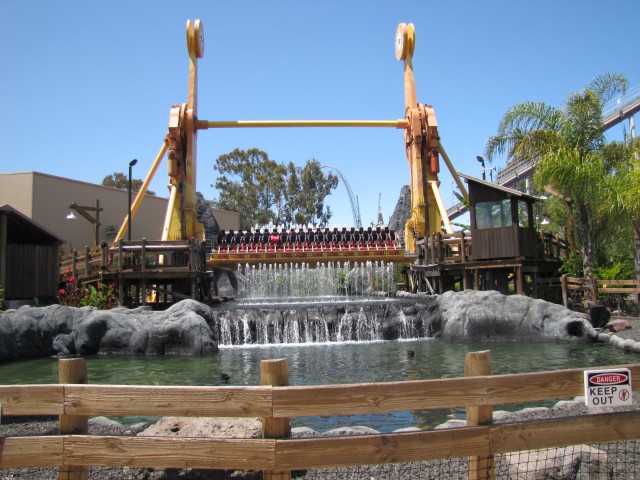 FireFall, will it ever run properly?

Installed in 2008 from the now-wasteland that is Geauga Lake, FireFall has always had it’s issues.  When the ride opened, several weeks delayed, it was missing fire effects, and since then the ride has struggled to continue proper operation.  On opening day 2011, the ride opened sans-gondola with just the support arms being hoisted above the water.  The gondola was brought on installed, and the ride did eventually open.

However in recent weeks, the ride has continued to be problematic.  Today the attraction was closed during the period I was in the park (from 10:30ish – around 3:00) and while at one point it was testing with a mechanic on site, it’s hard to believe that this ride can have such a huge problem.  But, perhaps that’s what the park deserves for getting an old-new ride instead of forking over the cash for an entirely new attraction.

As for construction around the park, there is none.  And while crowds are lite, some days this summer have brought huge attendance  In short, I don’t see Cedar Fair doing away with the park in the near future, but I also don’t see a big new coaster being added either.  I can see a Windseeker or some other flat ride being added in the near future, but nothing too grand.  We’ll keep our eyes out.