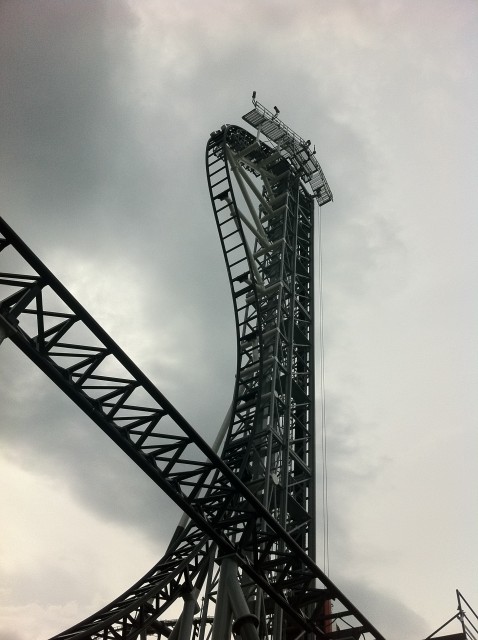 Recently I had the delight of riding the world’s steepest coaster – Takabisha (this apparently means ‘dominant’ in Japanese); a Gerstlauer Euro Fighter taken to the extreme at Fuji-Q highlands in Fujikyu Japan.

Firstly, Takabisha is an impressive looking coaster. Compared to the loopy colours of Dodonpa and Eejanaika, it’s a study in formal black, grey, white and red. And it works!

After bolting through the park and waiting in line, and completely forgetting one had to redeem your entry tickets to get actual ride tickets, I had to bolt all the way back to the front of the park and get this sorted. Silly me. The ride ops were kind enough to realise we were dumb tourists and let us come back in through the VIP entrance. Bear in mind I had happily lectured my partner about how Fuji-Q Highland works previously, and then completely forgot when we got there in the excitement of needing to get on the ride NOW NOW NOW! 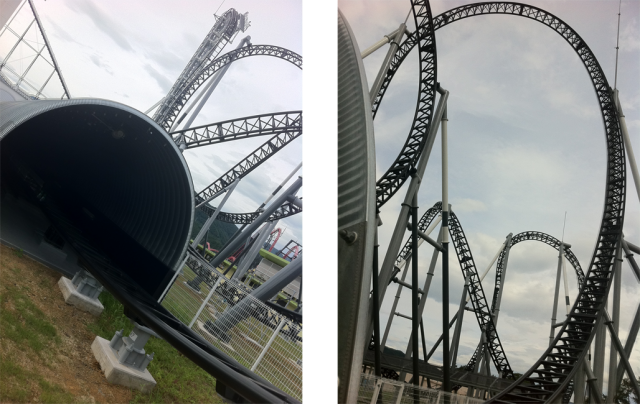 Anyway, onto the ride. After being strapped in with a seatbelt and pulldown harness (seems the same as other Gerstlauers in this oeuvre), you’re off into the dark. The ride ops shout excitedly and wave at every train – a nice change from the ‘Have a stroke and fall out for all I care’ Six Flags attendees. You enter the dark – and it’s pitch black, then do a sudden drop and half circle. Then into a tiny brake run, down a fun little dip and you can see the light again as well as the vertical track in front as you zoom over the very powerful first launch. Into the first three inversions – all of which are really high and provide some great hang time – then an overbanked hill and back into the back end of the station and brakes. This station is really stark and empty, bar a fire extinguisher…maybe a chance for some more themeing in here? A poster? An adorable Japanese cartoon animal with big eyes screaming about what’s to come next? 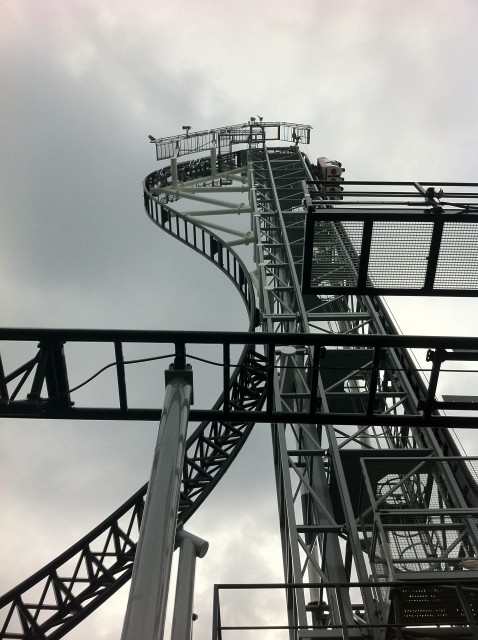 We take a slow turn round to the right and the impressive lift hill is in front of us. Slowly…slowly we approach (whether it’s to scare us silly or the system just getting everything secured…or both) then we’re on the chain lift and pointing towards the sky. It always feels on these rides (I’ve been on Mystery Mine and Saw) that this is the bit that if you so much as wiggle the wrong way the whole thing’s going to come crashing down. Again…part of the theatrics I suppose. The lift stops just before the top and you edge over excruciatingly gently… quietly…deliberately…there’s a magnificent view of (the usually hidden) Mt Fuji to your right…as long as you don’t have your eyes closed of course…the train starts to drop and is pulled up by the magnetic brakes (eliciting a yelp from everyone) then slowly…ever so slowly…leads you to the edge…keeps holding till you’re facing straight down, then keeps holding some more till you’re literally hanging out of your seat…then you’re off again! It’s a relief to make it back to the ground (albeit briefly) before another three very similar and impressive inversions to the first one, then up a hill and into the final brake run.

My mouth was dry – I was very impressed. It’s a great coaster and well worth their investment. There was some surprising headbanging going on at times – I might have done better to jam my head against the seat more but wasn’t really thinking. I like the way the super scary part is halfway through – seems to extend the ride quite nicely. 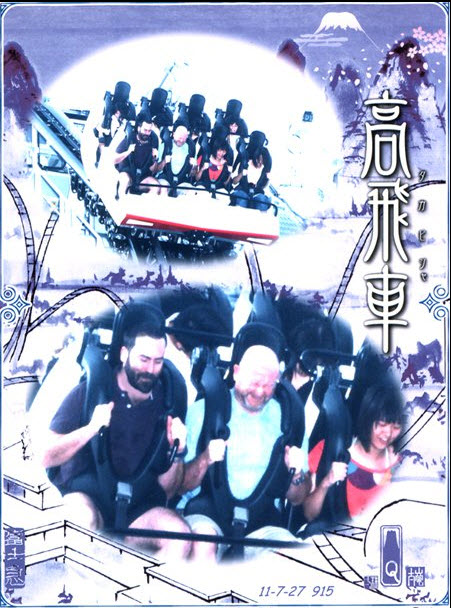 PS We accidentally took the long way to the park, through the Five Lakes district – it was a beautiful bus trip but fairly agonising when we knew time was short and you could see hints of the park in the distance. What doesn’t seem to be often mentioned is that there is a train station OUT THE FRONT OF THE PARK! No kidding. Use it! Get to Otsuki station (from Shinjuku station inTokyo which is accessible from anywhere on the Yamanote line), then transfer to the Fujikyu Line (get it? Fuji-Q?? Nice!) to Fuji-Q Highland. 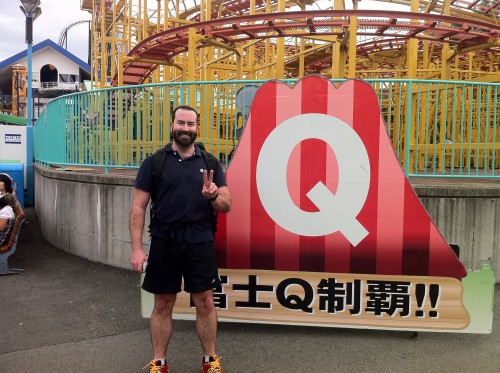