Posted on August 10, 2009 in Uncategorized by Justice
3 Comments

For those of you new to the site, be sure to check out part 1 of the Six Flags trip report.

Once our spin on V2 was over, my group and I headed over to the Shark enclosure.  Passing it we noticed Thomas Town.  This was a new addition for 2007 I believe, and features all of your favorite Thomas the train characters.  While I am not sure what is going on here but something appeared to be happening to the water play area.  I don’t know for sure but I thought it was there on my last visit in however I could be totally wrong.  Anyways here is a pic of the water tower covered by plastic.

The shark enclosure consist of a long moving floor where you travel through a large shark tank.  Fun expierence, no Sea World shark tank but very cool.  Unfortunately on our visit, the floor was not moving which is kind of sad considering all the walking you did in the rest of the day, your legs could use a break. 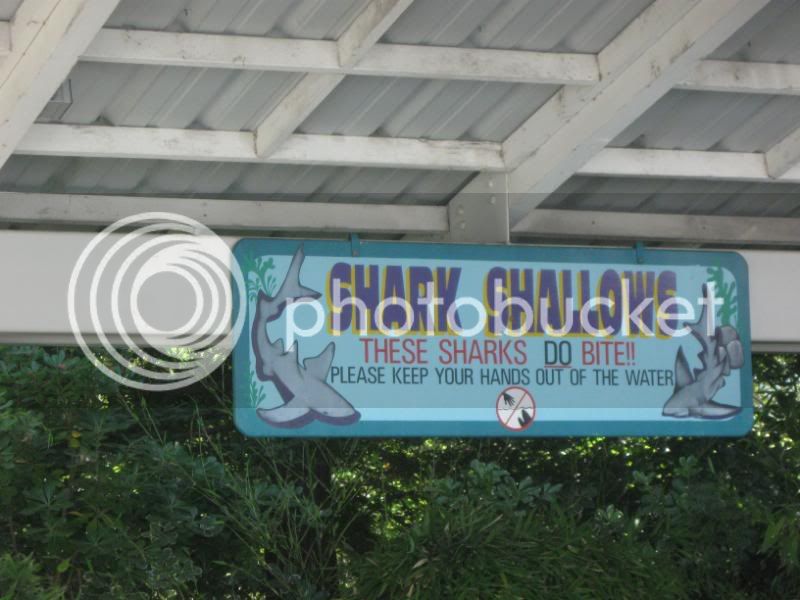 This is without a doubt one of my favorite theme park signs of all time.  It just shows you how to get stupid people to listen.  And trust me, we all know that there are a bunch of stupid guest at amusement/theme parks.

After our walk with the sharks it was time for the Season Pass Exclusive Odin’s Temple of the Tiger show.  The show is brand new and under construction on my previous visits.  I didn’t know what to expect as tigers don’t seem too interesting however I was impressed with the big marquee and surrounding landscaping.  While the landscaping was suppose to be an enclosure that looked like it had never been used, it was still well done.

Prior to the show, drummers came out to entertain guests.  They did little skits and were very talented.  Each had good facial expressions and clear personalities and it didn’t seem too rehearsed.  Clearly guests liked it, as they were mezmorized the entire time. 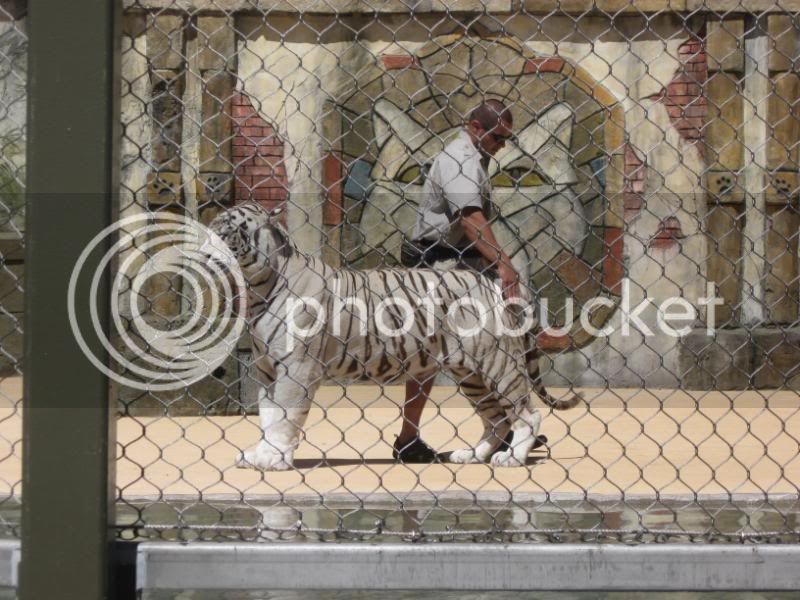 The show started out a bit cheesey with a skit about music selection before getting even cheesier with a voice changing software that edited there voices into a football announcer’s voice.  However, once it began it was great.  Odin came out and was huge, absolutely enormus.   One guest from each corner of the stand got to fead Odin a piece of meat with a stick they stuck through the cage which Odin seemed to appreciate.  Both members who participated also recieved a small Odin stuffed animal.

The trainer’s made Odin do various “natural behaviors” such as standing up, sitting and running.  Trainers also tossed meat on the ground to get him to move to a certain place however when they through it in the water, Odin was less then happy to jump in.  Infact the second time they through the meat into the water, Odin actually backed up!  It was quite hilarious.

Cubs!  Next up were the white bengal tiger cub and the bengal tiger cub.  Both were adorable and very playful.  They did everything from run around the stage to jumping in the water.  However I have talked with others who have seen the show and had a much different experience.    The trainer during my show jumped into the water and seemed very devoted, however from what I have heard, some trainers don’t even run around with them.  So beware, shows may vary.  I reccomend seeing it twice if you weren’t satisified with your first performance.

Here you can see how playful the two cubs were.  The trainer ran around with a ball attached to a metal chain.  He would jump through the waters and the tigers would be awfully close behind him.  At several points the tigers just about jumped on the trainer which created a quite spectacular experience.

Overall I truly enjoyed the new Odin’s Temple of the Tiger show and will see it again on my next visit.

Next was the Shouka show.  Shouka is SFDK’s Shamu; the park’s killer whale.   I did not see the show on my other visit so this was brand new and it was kind of a disapointment.  Shouka was misbehaving and went on two time outs.  He refused to do any tricks in the finale besides a big jump and a pose.  However the trainers did have Merlin the Dolphin helping them out.  But unfortunately the trainers weren’t clever enough to make Merlin do some tricks  for the finale to please the audience.  I won’t really judge this show as it seems that it wasn’t exactly “fully functional” per say.

As soon as Shouka ended we waited for the gates of Merlin’s Dolphin Harbor to open.  I was excited to see this show as it would be my second time and I wanted to see how consistant the show was.  If I do say so myself, I prefer a Dolphin show over a killer whale show any day.  Even at Sea World.

Once the show was over, I felt it was equally as good as the last time.  However it was a bit predictable.  I wish that live animal shows like these would switch up the acts a bit more because otherwise they get a bit redundant with the jokes and skits.  Merlin’s Dolphin Harbor is by far my favorite show though.  It is jam packed with tricks and behaviors.  Very little down time.

The day ended with one more ride on Medusa.  My thoughts on Medusa, I think it is probably the best coaster in Northern California besides Roar, however I prefer Scream! at Six Flags Magic Mountain.  The curving drop and the more twisted layout is just better.  But those are two nice parking lot coasters for sure.