This is a two part series.  It showcases the D23 Expo, a Disney centric event that features different news and other experiences only offered here.  I was fortunate enough to attend a day at the event and have brought images back to Park Thoughts.  To read Part 1 click here. 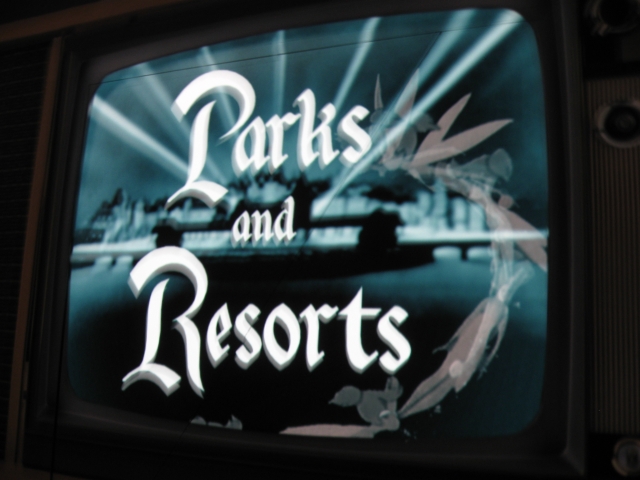 A small preshow serves as crowd control for the amount of guests in the exhibit.

After the major announcement ceremony from Jay Rasulo, I exited the event with the Star Tours II poster that was only handed out to the Arena Audience (jealous?).  Next stop was the Parks and Resorts plaza in Hall B.  I had already heard that this was one of the more popular exhibits and I couldn’t wait to see what was inside.

What I was not expecting was the preshow.  A short 90 second mini movie that was about the Disneyland television series that aired on October of 1994 to promote the opening of the park.  Now we take a look back in time to see the future of Disney’s Parks and Resorts. 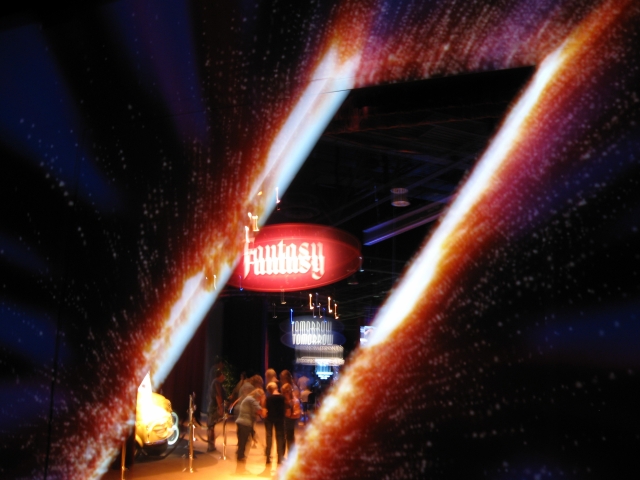 The screen magically opens revealing the bulk of the exhibit.

What was a hit with guests is when Tinkerbell comes and enchants the screen creating a ray of light that opens up the screen.  Then guests get to walk through the magical portal, but quickly, as an announcer comes on and the speaker and states “The magical portal is closing soon.  Please get out.”  Everyone giggled. 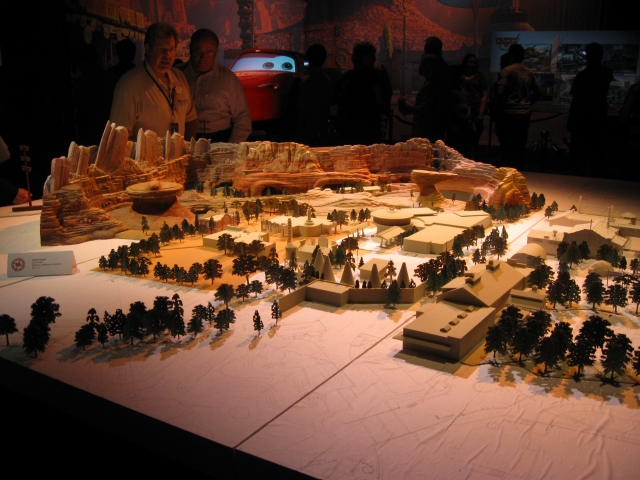 First thing the audience sees as they walk in a beautiful, and accurate 1:16 Carsland model.  Showing off the entire land, this model is what the Imagineers use to give them a concept of how the placement of Carsland will work.  In the background you can see Disney Parks and Resorts chairman, Jay Rasulo, discussing the model with one of the cast members in the designated area. 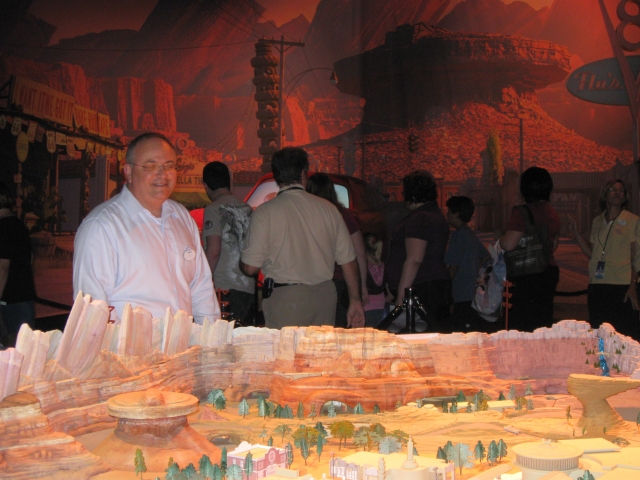 Jay Rasulo posing in front of the model for a photo op.

Jay Rasulo wans’t just there to take a look at a model he had clearly seen time and time before, but instead, was posing for press pictures.  However everyone besides me does not care and is mesmerized by the incredible Lightining McQueen projection test.  His eyes are projection as well as his mouth.  But what is really interesting is how you cannot tell where the projection material for his mouth starts and the other car material begins.  Yet another great effect that will be used in Carsland. 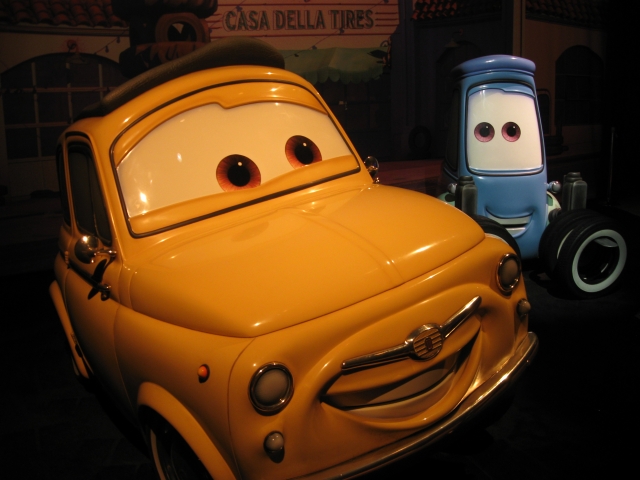 Static figures of Luigi and Guidio smile for pictures on the other side.

While they are not audio animatronics, these duo are really impressive in person as their detailing is incredible.  It will be very interesting to see these characters develop into full fledged animatronics later on.  Guidio is probably my favorite character from the entire Cars movie. 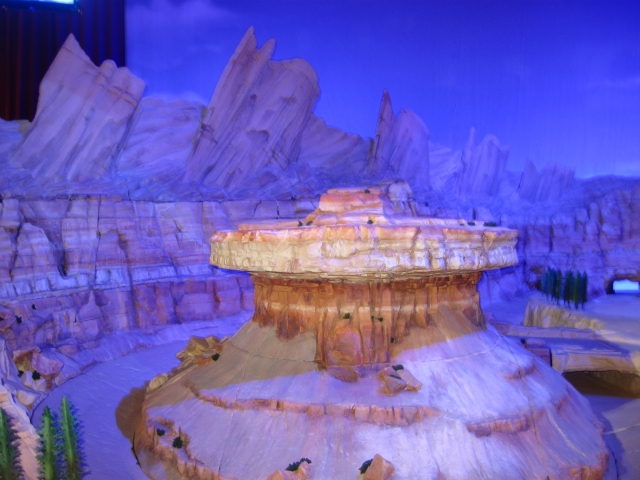 A much larger 1:8 model of Radiator Springs Racers model is behind the smaller Carsland model.

What was the highlight of the Carsland section was the Radiator Springs Racers model.  Rumored to cost a whopping $220 million, this is the biggest attraction Disney has ever built.  It will have over 6 acres of rock work, more then any other Disney mountain ever built.  While it will have a ride system similar to Test Track, instead of being about speed, Radiator Springs Racers will be more about the journey. 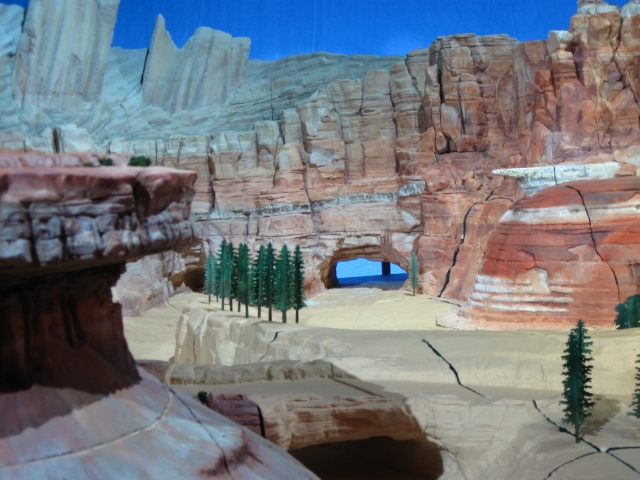 Notice all the intricate detailing in the massive model.

What is interesting about this model is how percise it is.  Imagineers spent the most time on this model as it is the actual one they are using to scan for the computer to mold the rebar.  I assume that those giant creases in the model are actually from when the cut up the model to send it over to the D23 Expo.  My favorite part is how large and detailed it will be.  Notice how that cave is where cars will exit meaning it will be around 10 feet tall.  Now comapre that to the beautifuly spikes in the mountain.  Radiator Springs Racers is shaping up to be more and more incredible. 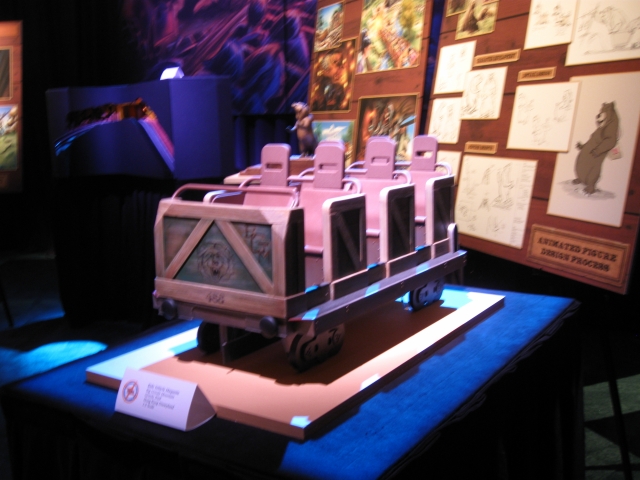 A Big Grizzly Mountain Coaster train model was on display.

Hong Kong Disneyland was perhaps the most interesting part of the exhibit.  It mainly focused on the two E-Tickets going in.  Big Grizzly Mountain being one of them.  Here we have a model of the coasters train on display.  These are very similar to those on Expedition Everest.  However, concept art indicates that instead of having 6 cars per a train, Big Grizzly Mountain will only have 4. 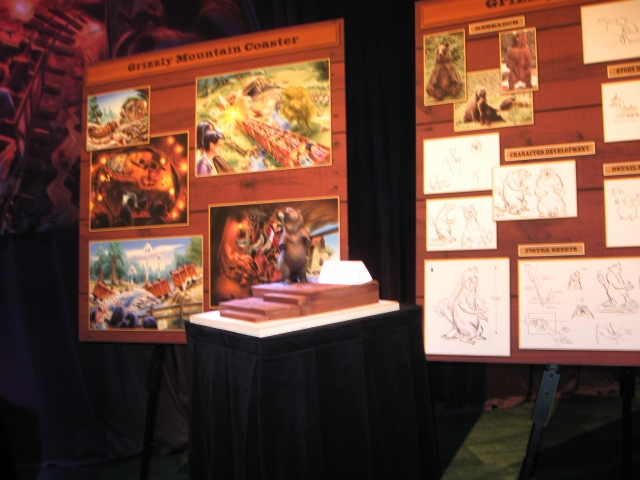 Concept Art boards were on display to give guests an idea of how it will all come together.

What I was not expecting from this ride at all was how unique it is.  The cast member working in the area explained that this will not be like other Disney coasters where they are very much boxed in.  Instead this will surround the entire area and is terrain following meaning fewer big drops, but more speed and small hills.

Another thing that I came to love about this concept was the bears.  The bears are what make the story.  These creatures turn the ride from frightening to a great family fun adventure.  In the model you can see a bear trying to scratch his back on a train switch but accidently pushes it sending riders off into a wild mine train adventure.

While hard to see, on the concept boards you can see the splash down effect, several more encounters with bears, as well as one of the highlights, the LIM launch.  Unlike Expedition Everest where the switches are on a slope, Grizzly Mountain will stop on a level track.  Then right before Dynamite explodes in the shaft, the train is launched backwards by LIMs into the grand finale. 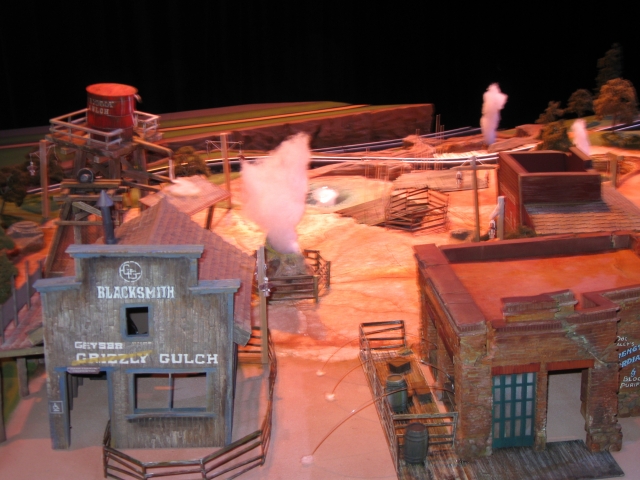 Hong Kong Disneyland is known for its lavish water areas, and Grizzly Trail will be no exception.

Hong Kong Disneyland endures incredible temperatures during the summer months.  As a result imagineers decided to construct a massive water play area.  The model above is all of the water play area with even more that isn’t shown.  While some guests in the United States may not appreciate it, those guests do not deal with Hong Kongs extreme temperatures.  Another key factor is the fact that Hong Kong Disneyland does not offer a water ride like Splash Mountian. 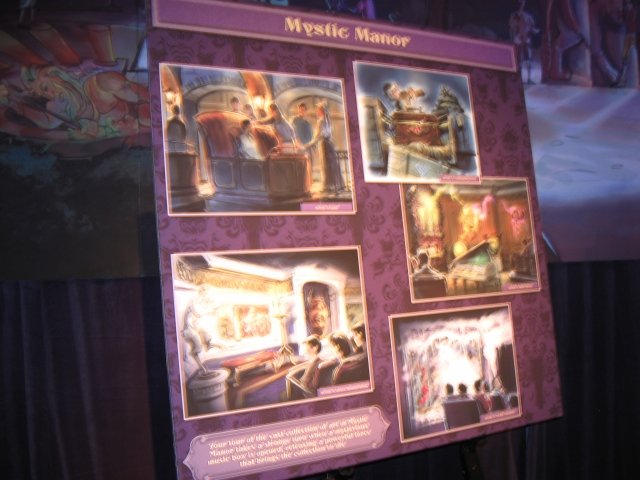 What stole the show was Mystic Manor.  This new take on Haunted Mansion will be an incredible new dark ride utilizing LPS technology from Pooh’s Huney Hunt.  This is not your average Haunted Mansion.  First off the mansion is not haunted therefore there will be no ghosts.  Instead the imagineers opted to go out for an ‘enchanted’ experience, as described by a cast member. 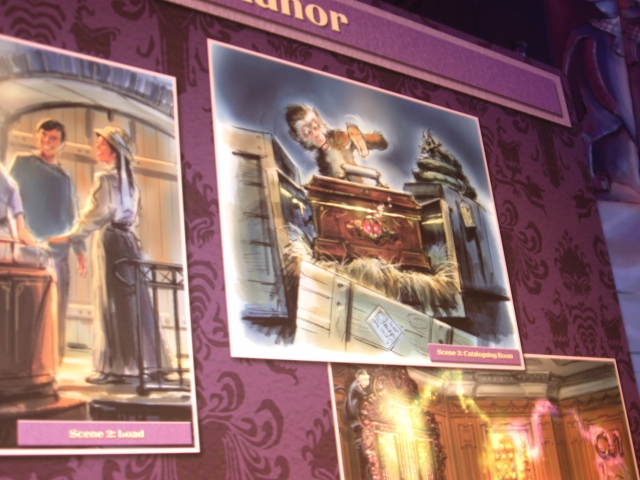 Albert, the curiois monkey finds something quite unusual.

Lord Mystic is a famed explorer who explores the world.  He collects different artifacts and brings him back to his manor, the Mystic Manor.  However one day when his curious, pet monkey, Albert discovers something quite interesting.  An acient music box.  When Albert plays the music box, he releases magical dust that brings everything in the mansion to life.  Sure to be a hit with guests, when Mystic Manor opens in 2013 (tentative) it will bring in the crowds. 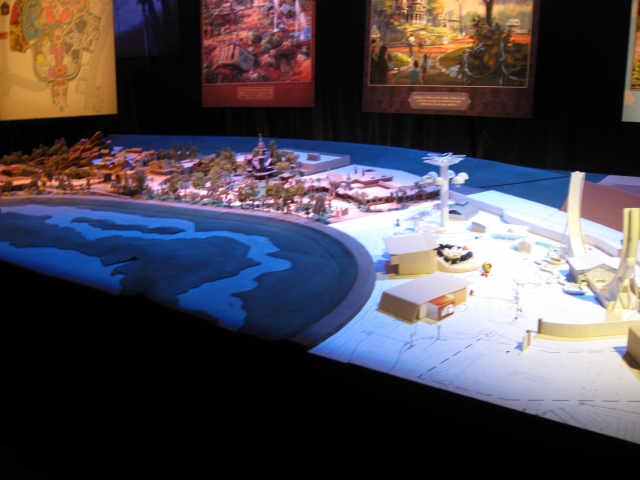 A model of the entire Hong Kong Disneyland Expansion is shown here.

Finally, the exhibit concludes with an overview of the entire Hong Kong Disneyland Expansion.  Toy Story Land was only shown in the model and no where else in the exhibit, an interesting note.  In the model you can see (front to back) Toy Storyland, Mystic Point, and Grizzly Trail.  The timeline for the openings are from 2011 to 2013 however those dates could change.

Overall I had a terrific experience at the D23 Expo and will do a post featuring the entire Mystic Manor later on.  Thanks for reading!  Leave your comments and park thoughts!