Posted on October 21, 2009 in News, Reviews, Uncategorized by Jeremie
4 Comments

The world has been seeing the first generation Intamin free-fall towers come down one, by one, by one. Many rumors suspecting that Demon Drop, the only standing 1st generation Intamin free-fall in all of North America, would come down soon. Six Flags Magic Moutain was the last park to take down its’ aging drop tower last year, in 2008.  Now that rumor has come true, but a twist has been added. 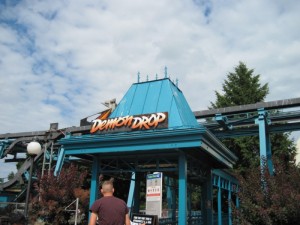 Recently released, Demon Drop is moving to Cedar Point’s sister park in California, Knott’s Berry Farm.  It will start construction in January of 2010, and will open Memorial Day week-end. Demon Drop was added to Cedar Point in 1983, this year including, will be its’ 26th year of operation.  It stand’s 131 feet above the ground and drops 100 ft. before reaching its final position. It turns riders 90 degrees from a sitting position, to a laying on your back position that comes to a hault! Also, the ride reaches a top speed of 55 mph withing 2 seconds.

There are good and bads about the ride. It is old, and needs a lot of fixing. The ride is moving, which is definitely good. It means the ride will stand for years to come! Hopefully, it will be re-colored, fixed up, and up to date when completely rebuilt. It will still be the only 1st generation Intamin freefall still standing, but a newer version. It could just be a move by Cedar Fair to save money, instead of adding a completely new attraction. Cedar Point had trouble selling Demon Drop for years, but somehow, they managed to Knott’s Berry Farm. 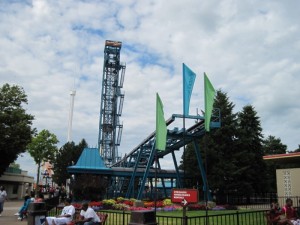 The ride itself, definitely a thrill! Standing in line, you hear the old rusty parts, making the ride way more scary. Going up that vertical lift is creepy. At the top, you move forward, lots of sound effects, and then you come to a sudden stop. Drop! This ride feels like it has the fastest accelerating drop! It really lifts you out of your seat with 2.5 seconds of weightless-ness. Starting toward the sky horizontally, adds to the ride. The cart then comes to a stop and you return the station. It is a ride a ride, and it’s great to hear it is staying longer even though it is moving.

What your thoughts on Demon Drop? Leave a comment below with your Park Thoughts. Thanks for reading!