In Spring 2012, Thorpe Park guests will prepare for complete annihilation when The Swarm hits the park.  The massive new 2012 coaster has officially been announced and construction has begun on the coaster’s new island behind Stealth.  Themed to an apocolyptic, war time alien invasion, Thorpe Park will continue to push the edge as one of the UK’s top thrill ride destinations. 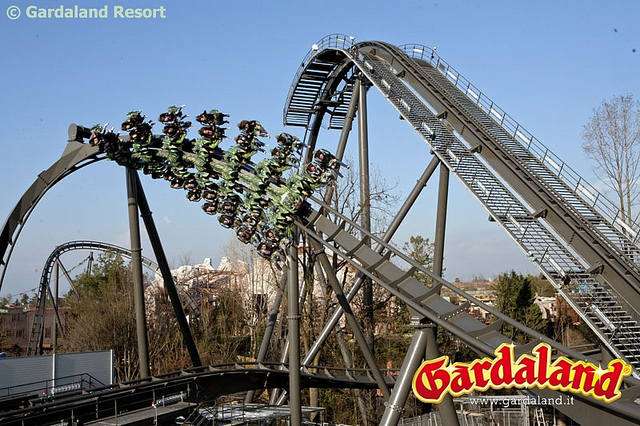 The Swarm will use Bolliger & Mabillard's new Wing-Rider trains extending riders over the edge of the track. The first model of this coaster opened earlier this year at Gardaland. Image © Gardaland

The most anticipated aspect of The Swarm is it is expected to be the second use of B&M’s new Wing Rider trains.  The layout unveiled back in February shows a stark difference from the earlier model of Raptor at Gardaland.  Rumors also have been swirling that the seats could possibly rotate similar to S&S Power’s 4th Dimension design.  However, something like that would be highly marketed (and very costly), so it doesn’t appear to be happening on this model.

The layout looks great, I’m loving the 127 ft inverted drop right off of the lift hill.  Thorpe Park also seems to be going all out with theming including a full sized Airliner crashed in the middle of the coaster.  However, Thorpe Park continues to pump out some of the most bizarre themed coasters on the planet. X:\ No Way Out, Nemesis Inferno, Stealth, SAW: The Ride, and now an alien invasion apocalypse?  Not that there is anything wrong with that, I just find it….strange.

Can’t wait to see more construction as the coaster rises. Check out The Swarm’s official site here.  So far, what are you most excited for in 2012? Leave a comment with your Park Thoughts below.