Since “Announcement August”, the two super coasters of 2012 have quickly been established: Canada’s Wonderland’s Leviathan and Hersheypark’s SkyRush.  Obvious comparisons make these two coasters ideal “rivals”: Bolliger & Mabillard vs Intamin, Giga-Coaster vs Mega-Coaster, giant overbanks vs airtime hills, Canada vs USA (well, perhaps not that extreme).  It is certainly possible that these two coasters could each rank in the Top 20 on the planet.

So which is more anticipated?  According the most you, the readers, the undisputed winner is Leviathan. SkyRush’s innovative winged-seating, and top-ranked coaster manufacturer was unable to save it from the sheer power of the Canadian beast.  Leviathan’s 306 foot drop, 90 mph top speed, and nearly mile of track are all impressive and provide for tough competition. 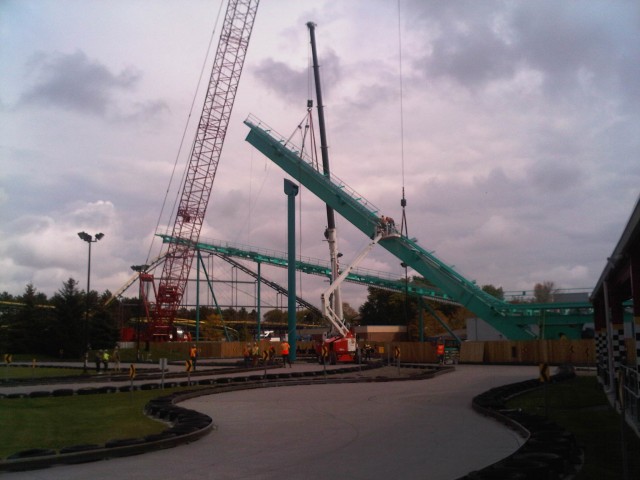 Construction on Leviathan is well underway.  The ride’s lengthy brake run, as well as station and transfer track have all been erected.  Construction is slowly progressing on the coaster’s 306 foot lift hill; Bolliger & Mabillard has even introduced a new type of lift track unique to Leviathan.  Additionally, Canada’s Wonderland announced that two cranes will be used to install the “crowning” segment of the lift-hill.  Certainly, this is a coaster to look out for!

Continuing 2012 anticipation, the next poll puts 3 same-style coasters head to head to head.  In 2011, Bolliger & Mabillard debuted their first Wing-Coaster.  Featuring cantilever seating, guests ride with nothing above or below them.   This year, the first Wing-Coaster, Raptor, opened at Gardaland in Italy.  Fortunately for many coaster fans, three Wing-Coasters are being built by B&M for 2012 much closer to home.  Time for the tale of the tape for the 3 contenders:

The Swarm at Thorpe Park:

So which B&M Wing-Coaster do you think will be the best?  Vote in the poll above or on the sidebar.  Voting will be open for the next two weeks.