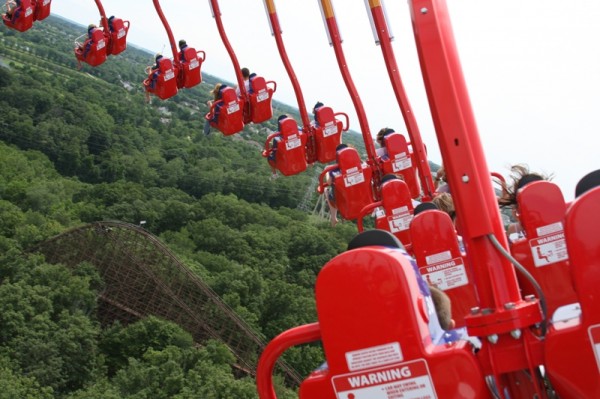 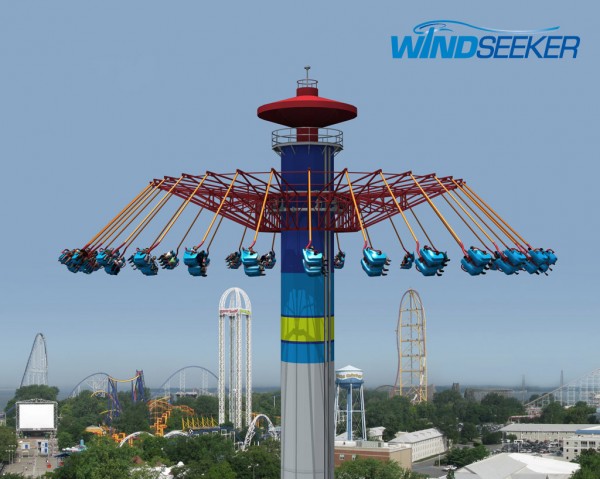 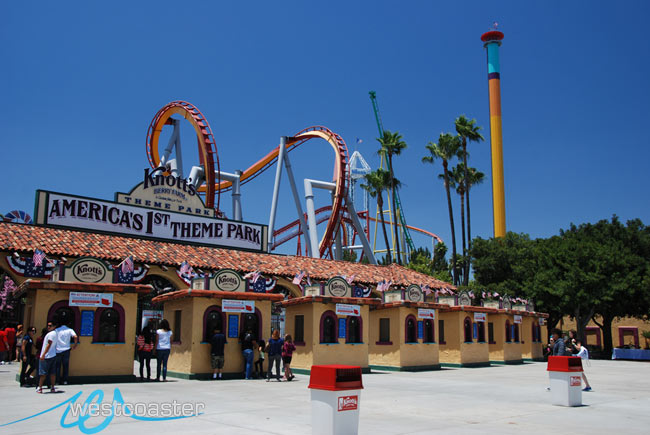 For entirely too long, we’ve asked our readers what was their favorite roller coaster named ‘Goliath’. At Six Flags Magic Mountain, the original Goliath is one of the tallest and fastest coasters on the planet reaching speeds of 85 mph, and a height of 235 feet. Trains dive under ground and over huge elements in the first half, before a twisted second half full of helixes, over banks, and turns. Two years later, Six Flags Holland (now named Walibi Holland) debuted an Intamin version of Goliath boasting a much more low to the ground layout with plenty of airtime. The European version also includes a unique Stengel dive element among the rest of the 4,000 feet of track. In April of 2006, Six Flags Over Georgia employed Bolliger & Mabillard to build there custom Goliath with a layout so giant the coaster goes outside of the park.  With 7 airtime hills, a massive helix, and a horseshoe element it occupies the most space of any of the Goliath’s.  A month later, the Canadians debuted a similar version of the Georgian Goliath at La Ronde with 10 airtime hill coaster that encompassed the the park’s parking lot.  This once again is completely different in layout from all of the other Goliath coasters.  Last but not least, in 2008 Six Flags Fiesta Texas took on an entire new direction with the Goliath name by making an inverted with a Spanish motif. While not as large and airtime filled as the other, the forceful and compact layout is exactly what the park needed.

After an incredibly long voting period, we received 147 votes.  With the results in, the winner of this poll is Goliath….at Six Flags Magic Mountain! Claiming 39% of the vote, Goliath at Six Flags Magic Mountain is the oldest, as well as at the most popular park.  Personally, I despise the ride and find it to be a complete waste of money.  However apparently 58 people feel otherwise.  In 2nd, Six Flags Over Georgia’s B&M hyper grabbing 33% of the votes, followed by Walibi Holland (14%), Six Flags Fiesta Texas (11%), and lastly La Ronde with a mere 5%.  Do these polls surprise you?  I’m a bit surprised that the readers preferred the no-name manufacturer over the B&M and Intamin hyper coasters.  But sometimes these things just turn out this way.

Which theme park has the best roller coaster named 'Goliath'?

Aside from the giant, mega monsters like Texas Giant and Cheetah Hunt, 2011 has also been a year of compact coasters.  Many parks are buying up the smaller, more condensed ride that can fit snugly in tight corners of parks.  However, despite their tiny foot print these rides often pack a punch.  Six Flags Magic Mountain, was the first US park to add a Intamin ZacSpin coaster with Green Lantern: First Flight (set to open this Friday).  The “4th dimensional” coaster has a separate car chasis that rotates freely as it winds through the unique course.  ZacSpin coasters feature no turns, strictly verticle hills and drops which can easily be overlapped on one another, making for a small coaster foot print.

Meanwhile the East coast has gone over the edge with their 2 new Gerstlauer Euro-Fighters opening up this year.  Featuring a signature 90 degree lift and beyond vertical drop, this model packs a punch with inversions, tight turns, and various hills.  Canobie Lake has gone wild with their new Untamed Euro-Fighter, featuring a 97 degree drop and two inversions.  Six Flags Over Georgia debuted Dare Devil Dive this summer.  A 2nd-generation Euro-Fighter, the custom design utilizes unique trains with lap bar restraints, along with a far more twisted layout.

With parks, often looking to fill all corners of the park, small foot print coasters are a great way to increase capacity and renew popularity in a park.  Especially for seaside piers, and small family-owned amusement parks, these smaller creations pack a punch in a small area.  Saying that, which do you prefer, the longer, more twisted layout of the Gerstlauer Euro-Fighter, or the unpredictable drops of a Intamin ZacSpin coaster.

Which extreme, compact coaster model do you prefer?

The poll is now open both above and on the side bar. Poll closes in 2 weeks (I promise) and let’s see if we can get over 100 votes in that time! Which model did you vote for? Leave a comment with your Park Thoughts below.

5 ways to make your next Theme Park trip cheaper

So, you’re ready to visit the Theme Park? You’re ready to hop on those coasters and scream your head off, but you don’t want to break the bank. How do you have fun while saving? Here are some easy tips to save on your next trip to the park. Do you really need that big plush bear? It might be tempting to win it, but don’t go wild trying to get it. It’s fine to play a $3 game a few times, but don’t play more than three times at most. The prizes the parks have are insanely cheap, so you’re really wasting your $20. Why spend $20 on a $2 prize?

Pop is actually really bad for you on a hot summer day. You’ll get even more dehydrated, thus you’ll need to buy more and more. Instead of wasting $4 on a pop each time, just find a water fountain or go to a food stand and ask for a cup of water. You’ll only be charged for water if you buy it bottled, so don’t make the mistake of doing so. Parks will always provide water no matter what. The last thing they want is someone passed out on the midway. If you’re at Holiday World though, you don’t have to worry about this since it’s unlimited soft drinks all day, every day.

3. Eat outside the park

If you’ve driven to the park, just leave to eat. Most meals in the park cost $9 and up, which is crazy when you can get a meal at Mc Donald’s for less than $6. Parks will usually allow you to leave and come back at least once with your parking pass. If you don’t want to leave the property, just pack a sack lunch. Sometimes a peanut butter & jelly sandwich is better than a greasy burger.

Woah! That shirt is awesome! But will you really wear it that often? I find myself looking through theme park gift shops finding all kinds of cool things. However, I don’t like coughing up the cash. I’m not saying you shouldn’t buy souvenirs. Just don’t buy everything you see. Remember: you’re basically paying for the name of the park on the item. Most of the time, the item costs nothing if you went to Walmart.

5. Don’t be afraid to ask for deals

If you’re looking to get some great bargins throughout the day, make sure you drop by Guest Relations first thing at the park. They should be happy to answer your questions about current deals inside the park. Last year when I was at Valleyfair, they had an entire Chicken Strips basket (I believe that’s what is was) for only $5. That’s certainly a huge discount compared with the normal $9 you’d pay. Don’t be afraid to ask. The parks wants you to spend more money. They need it, plus they have to get rid of their inventory somehow.

I hope these little tips help you when visiting a park the next time.

Do you have any ways personally to save? Share your Park Thoughts with us!

The great Halloween event on the planet is back this year and with a vengeance to celebrate it’s 21st anniversary.  Universal Orlando has just launched the preview website for Halloween Horror Nights 21. The slogan in the preview is “Be Careful What You Wager, Because Nobody Beats the House.”  With a severed hand appearing to hold a pair of devilish cards.  The...

Europa Park has announced they will be adding a new Great Coasters International wooden coaster for 2012. Of the park’s 11 coasters, the new for 2012 GCI will be the Europa Park’s first wooden coaster.  The new mythology themed coaster will top out at 35 meters (114 feet), reach speeds of about 100 km/h (62 mph), will be 1050 meters in...

Recently, Universal Orlando celebrated the 1 year anniversary of the grand opening of The Wizarding World of Harry Potter.  After years of planning and heavy involvement with author  J.K. Rowling herself, on June 18, 2010 Hogsmeade opened it’s gates to muggles for the very first time.  Crowds swelled to Islands of Adventure, with at one point on opening day the line...

Posted on in Updates by Justice
0 Comments

Although the 2011 summer season is just getting started, several parks are have already begun construction on their 2012 coasters.  Typically, projects that begin so early are certainly no small feat, and are often some of the most expensive coasters of the year.  Hershey Park has long been hinting at their 2012 addition with their self-created Ride Institue of Technology website,...