Posted on July 22, 2010 in News, Uncategorized by Justice
0 Comments 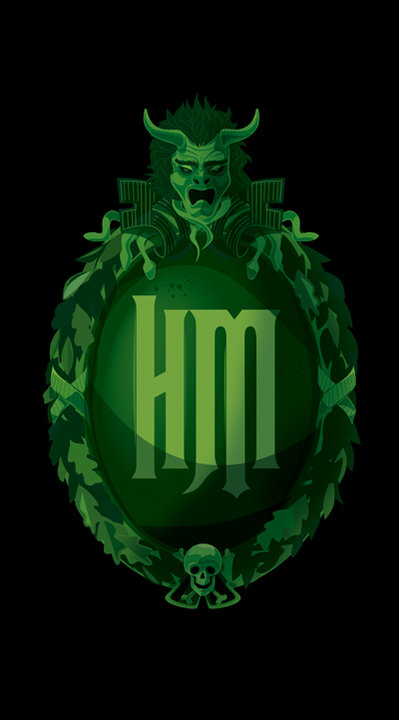 Guillermo del Toro surprised plenty of Comic Con fans in San Diego today with the announcement that he would be re-making Disney’s Haunted Mansion movie from the point of view of the infamous Hatbox Ghost.   The Haunted Mansion, Disney’s first attempt at making a movie based on the ride, was a flop compared to the extremely successful series Pirates of the Caribbean which opened just a few months earlier.

Personally, I am not too happy with this news.  I really am disappointed with the lack of original rides the American Disney Parks have been producing.  So to think that the Haunted Mansion, one of the few left non-movie E-Tickets would be given a movie overlay (i.e. Pirates of the Caribbean at Disneyland, the Magic Kingdom, and Tokyo Disneyland).  However, this news does not guarantee it happening.  Anyone remember Jungle Cruise: the Movie?  Or how about Tomorrowland and the Tower of Terror movie re-make.

I guess we will have and see how this plays out.

Ferrari World Abu Dhabi continues to get closer and closer to the park’s opening day each day, the park continues to build the suspense by releasing more details.  With just 100 days to go, actually 99 today, the park has finally unvieled a full lists of attractions.  The park will offer a wide variety of attractions for the whole family.  Whether it be a 4D movie spectacular, or a 240 kmph roller coaster, Ferrari world Abu Dhabi.  Here is the full list of opening day attractions: 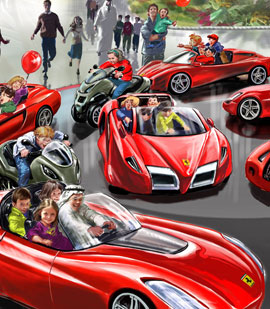 • Formula Rossa – The world’s fastest roller coaster, reaching speeds of 240 kmph.
• Speed of Magic – A fantasy 4-D journey following the adventures of a young boy as he travels through a kaleidoscopic dreamscape of natural and phenomenal environments, where no Ferrari has gone before.
• Made in Maranello – A virtual trip behind the walls of the famous Ferrari factory in Maranello, taking guests through the intricate process of making the world’s most sought after car.
• V12 – An exciting flume ride to the heart of a 12 cylinders engine.
• G-Force – A thrilling tower ride that will shoot thrill-seekers through the red roof and 62 meters in the air before plummeting back to Earth, experiencing the actual G-force of a Ferrari, in a seat directly inspired by the Ferrari Enzo.
• Scuderia Challenge – Cutting edge racing simulators similar to those used by the drivers of the Scuderia Ferrari in training.
• Viaggio in Italia – A virtual aerial voyage over Italy’s cities and their main monuments, mountains and coasts pursuing a Ferrari.
• Fiorano GT Challenge – A unique dueling rollercoaster with Ferrari F430 Spiders twisting and turning through tight corners on a sprint to the finish line.
• Bell’Italia – A miniature recreation of Italy’s most famous locations, from the picturesque Portofino and the Amalfi Coast to Monza racetrack, the Colosseum in Roma, Venezia and Maranello, the heartland and home of Ferrari. 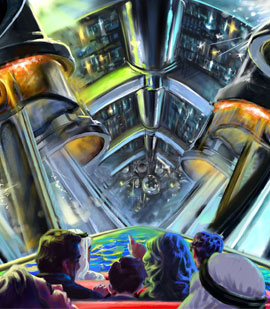 • Paddock – A re-creation of the Ferrari motor home including garages, transporters & hospitality suites with interactive shows offering fans a taste of the true action behind the scenes on a Grand Prix race day.
• The Pit Wall – An interactive theatre that allows guests to test their judgment in realistic racing scenarios.
• Galleria Ferrari – The world’s largest Ferrari gallery outside Maranello, showcasing the most exclusive range of classic and contemporary Ferrari’s from all over the world.
• Junior GT – A driving school for children with expert instruction where they will drive reduced scale F430 GT Spiders on an equipped driving course.
• Junior Grand Prix – After the Junior GT driving experience, budding F1™ drivers can enjoy the race track in scaled down Ferrari F1™ racers.
• The Racing Legends – A ride through Ferrari’s greatest racing moments starting from the first races all the way to today’s F1 victories.
• Driving with Champions – An interactive 3-D show which follows the adventures of a young engineer who is taken on the ride of a lifetime with a racing champion on his first day working at the Ferrari factory
• Cinema Maranello – Ferrari World’s own theatre showing ‘Coppa di Sicilia’, a short film that tells one of the many inspiring stories from the life of the legendary Enzo Ferrari.
• Junior Training Camp – An interactive play area for children where they can engage with a waterless car wash, become custom ‘constructors’, climb up the grandstand, pilot remote cars, peddle their own miniature Ferrari and play with an F1™ car made of soft, guest-friendly foam.
• Carousel – Featuring never-before-seen Ferrari prototypes based on winning designs from a Ferrari competition.
• Dining and Shopping – A range of concept restaurants and cafes offering authentic Italian dining experiences, in addition to unique shopping locations. 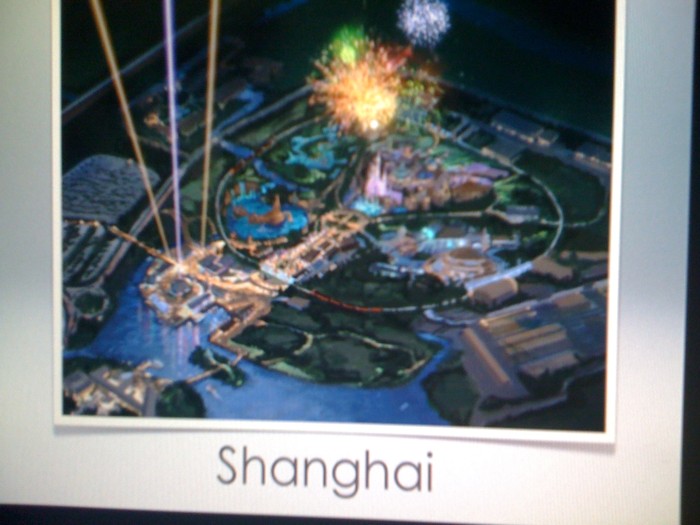 Shanghai Disneyland artwork as seen in presentation at the Walt Disney Family Museum.

Since Disney confirmed Shanghai Disneyland back in November, little information has been released.  However, there have been a handful of leaked details and rumored additions.  This past week, to celebrate the 55th Anniversary of Disneyland, the Walt Disney Family Museum held a special presentation.  And in the presentation, this slide showed up.

This appears to be the very first official concept art of Shanghai Disneyland.  While it is very grainy, and very small, it does give an idea of the park.  From it, we can see a large castle, similar to the Walt Disney World and Tokyo Disneyland castles, a hub and spoke style layout, a train that circles the park, Fantasyland, Tomorrowland, Adventureland, Main Street, and Frontierland, along with a shopping district, perhaps Downtown Disney.

Several internet sources have stated that Shanghai Disneyland will take a new approach on the Disney park.  To further more support the idea, when Disney released concept art at their 2006 shareholder meeting, one depicted a new Disney park, and was water based around islands.  Perhaps Tomorrowland will take the style shown above, and instead of featuring lands, it could now have islands. 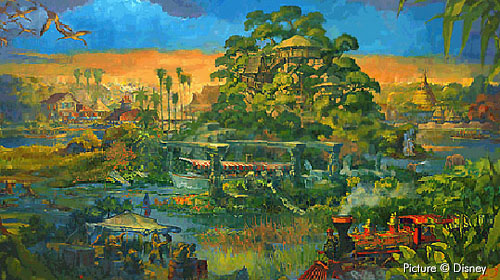 While this is all great indicators to a new version of the Disneyland park, lets not forget what the early Hong Kong Disneyland artwork promised is most certainly not what was received.  Hong Kong left many promised attractions out of opening day, such as Toon Town, Frontierland, a Little Mermaid attraction, Peter Pan’s Flight, and much more.

With the possibility of construction starting as early as November, we could be hearing more about the Shanghai theme park project in the coming months.  Keep an eye out.

Superman The Escape at Six Flags Magic Mountain was once the park’s signature attraction.  Opened in 1997, it was the first coaster to break the 100 mph mark.  While short, the ride does provide for a good thrill after the 100 mph launch.  The coaster then rockets skyward before descending backwards towards the earth.  In recent years, there have been numerous rumors...

Posted on July 15, 2010 in Uncategorized by Justice
0 Comments

This Summer, Sky Rocket is getting all of the attention at Kennywood.  However, the park brought in another new attraction this year.  The Kennywood Laser Spectacular, is a laser, light, projection, and fire show that occurs nightly.  As night falls, a screen rises near the RACER.  At 9:30 sharp, music begins, and on the screen the famous Kennywood arrow indicates...

Posted on in News by Justice
3 Comments

Gardaland and B&M have teamed up to announce a one of a kind attraction, called X-Raptor.  X-Raptor is Bolliger and Mabillard’s answer to Intamin’s Wing Rider.  The ride will put riders over the edge of the track suspending them over mid air.  Riders will be trying escape form a giant beast terrorizing the cities. Featuring a 2,500+ foot track, a...

Summer is in full throttle and the crowds are pouring into California’s Great America.  Atleast, that’s what one would think.  However, it doesn’t seem to be the case.  On this lovely day, crowds were sparse, lines were short (practically walk-on), but fun was plentiful.  Haunt construction has still yet to begin, and the 4th of July decor has been taken...